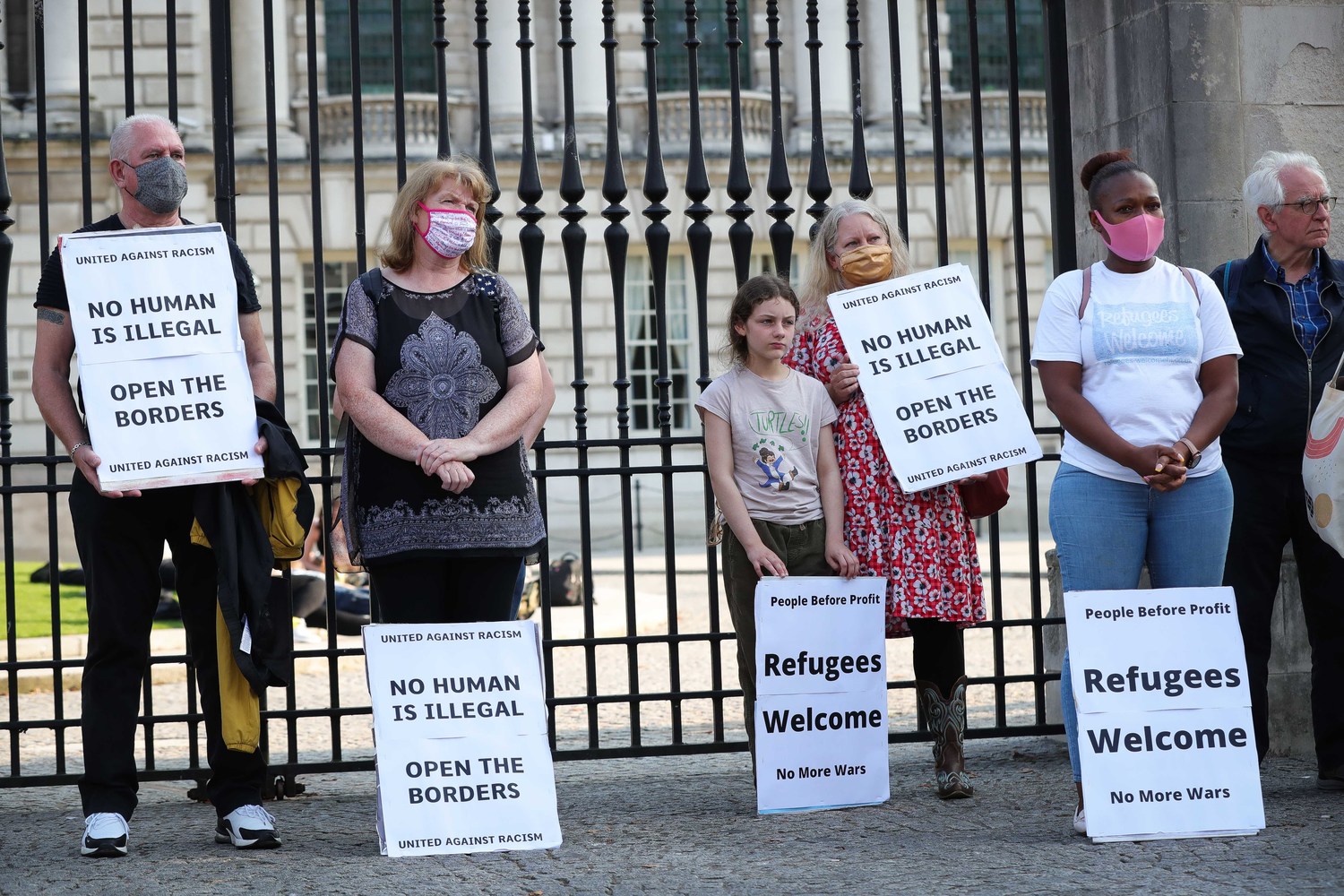 A rally organised outside Belfast City Hall, where people gathered to call for Northern Ireland to open its borders to Afghans. Photo by Kelvin Boyes, Press Eye.

THE catastrophic withdrawal of US and British troops from Afghanistan has left Afghans living in Northern Ireland “distraught”, with major concerns about their family members still living in the country.

Immigration experts and local politicians have called on the Stormont Executive to request the Home Office to prioritise resettling refugees with their family members who are already living in Northern Ireland.

Mina Nawadi arrived in Northern Ireland from Afghanistan with her family four years ago, after threats from the Taliban forced them to flee.

Incredibly, her journey here was taken mostly by foot. She informed us it was difficult and deadly. Ms Nawadi told The Detail: “It was a big struggle, we had to cross through mountains and had many difficulties on the way.”

A lot of people who Ms Nawadi met on this journey died crossing the sea between Greece and Turkey. She said: “This is difficult for every refugee, especially with kids. Most of the families died, many can’t swim. I saw lots of those families. They were difficult, terrible days.”

One part of the family’s journey included a week spent in a van with other families.

They finally reached Northern Ireland in 2017. However, Ms Nawadi had to wait another two-and-a-half years before she was given refugee status by the UK authorities.

Ms Nawadi said: “The asylum system is not easy. The waiting list is difficult for all asylum seekers and refugees. People go to lawyers and ask ‘how can we wait like this’. It makes you worried about the future.”

Ms Nawadi’s ten years’ experience working in local media in Afghanistan ended after the network she worked for, Tolo TV, aired a news programme about the activities of the Taliban.

While the American troops were still in the country, the Taliban threatened employees at the company prompting Ms Nawadi to flee along with her family. A suicide bomber later killed several of her former colleagues.

There were reports that Tolo TV's female presenters were banned from working after the Taliban seized control in Kabul two weeks ago and there are serious concerns that further censorship measures will soon be introduced.

Now living in west Belfast, Ms Nawadi has said she and her three young children are settled and happy, but she is concerned about her family members remaining in Afghanistan. Her mum, brother and husband’s siblings still live there, and some of them still work for the Tolo network.

“Some of them have escaped a few times but were sent back to Afghanistan when they were found along the Iran border,” Ms Nawadi said. “They are now in hiding and can’t go outside because they are scared. It is a very worrying time. Everywhere is closed.”

“I hope they can help my family come here but we don’t know what will happen,” she said.

Sinéad Marmion, a solicitor at Phoenix Law specialising in asylum and immigration cases, is currently representing half a dozen Afghan asylum seekers or refugees. The majority of cases are Taliban related.

“Afghans I’ve been speaking to are distraught,” she told The Detail.

Some of her clients have only recently received their refugee status from the Home Office, which decides on immigration cases, despite putting in their claims for asylum over two years ago.

They are now applying for their family to join them in Northern Ireland, a process which was often lengthy even before the recent events. Some of her clients are now not able to contact their families back in Afghanistan.

While the number of Afghan refugees and asylum seekers in Northern Ireland are said to be relatively low, there are no readily available figures of those currently living here.

In addition to being a lengthy process, family reunification for refugees is normally limited by the Home Office to certain members of their immediate family – generally a spouse or partner, and dependent children.

While there are separate provisions for other relatives, experts have said these are far harder to meet and and very few such applications succeed.

This means that those, like Ms Nawadi, who need to get a sibling or parent out of the country have limited options. 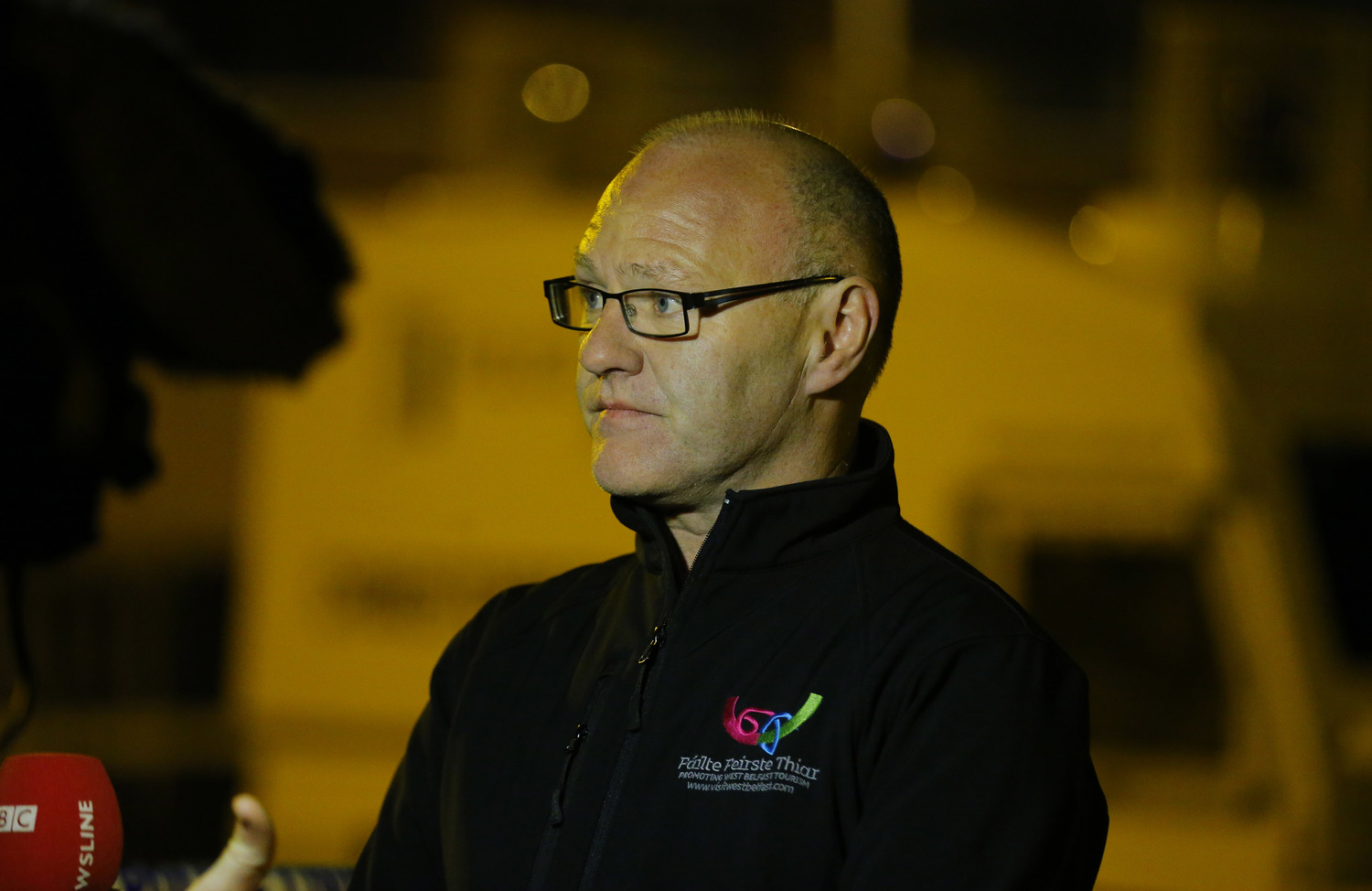 Sinn Féin’s Paul Maskey, Ms Nawadi’s MP, has said his office is “working on a number of cases” to evacuate Afghans “who are under threat because of their profession, beliefs, or gender”.

He told The Detail that "every effort should be made by relevant governments to reunite families as they land on our shores".

However, the West Belfast representative added that many of the UK Government’s phone and email lines “are either without personnel or completely overrun” which has made it “extremely difficult” to engage on these matters.

Mr Maskey also said: "What is clear is that those nations, involved in the invasion and occupation of Afghanistan, have a duty of care to those civilians who may be under threat."

The SDLP’s leader, Foyle MP Colum Eastwood, agrees. He told The Detail: “I believe that any government who can help people in Afghanistan have a moral obligation to do so, particularly the British and US Governments who bear so much responsibility for the terrible situation unfolding before our eyes.”

Mr Eastwood also believes The Executive Office (TEO) “should be leading the way” on helping people in Afghanistan, “and making it clear that Afghan refugees will be warmly welcomed into our communities”.

He said: “Reports that the Home Office are unwilling to help reunite families and making it difficult for people to get their families out of the country are shocking and I will continue to press them on this.”

Until the recent Taliban takeover, the Home Office had long classified Kabul as a safe destination for asylum seekers to return, meaning that around half of Afghan asylum applications in the UK were regularly refused.

The UK Government has rejected more than 32,000 Afghan asylum seekers since 2001, and deported over 15,700 Afghans since 2008. Enforced returns to Afghanistan are currently suspended.

Liz Griffith, of the Migration Justice Project at Law Centre Northern Ireland, told The Detail that “the position of those Afghanis currently within the UK asylum system also needs to be urgently addressed”. As of June 2021, there were over 3,000 Afghans seeking asylum across the UK, including Northern Ireland.

“In recent years, the Home Office has refused more than one in two asylum applications from those who have fled Afghanistan," Ms Griffith said. "Such refusals should now be reviewed in light of the new threats posed by (the) Taliban and forcible returns to Afghanistan should be halted.”

Ms Griffith added that the refugee family reunion process should be speeded up and the eligibility criteria expanded.

The Law Centre also said the UK’s current plans, in the Nationality and Borders Bill, to deny refugee protection to those who – similar to Ms Nawadi – arrive through irregular journeys “should be abandoned” because “regulated means of travel are simply not available for many people needing to flee persecution”.

The DUP was the only party in the UK to support the government on the bill.

West Belfast People Before Profit MLA, Gerry Carroll, said the UK Government’s commitment to only resettle 20,000 people from Afghanistan in the coming years was a “complete betrayal of responsibility from one of the main instigators of violence in the country over the last 20 years and longer”.

He told The Detail: “It’s not good enough for the northern Executive to pat themselves on the back for accepting just a handful of refugees here.”

Mr Carroll also said that the Stormont Executive should be advocating to ensure that the criteria for granting refugee status is widened, among other measures to help Afghan nationals already in Northern Ireland.

TEO told The Detail it’s “fully committed” to helping and that “important scoping work has already taken place to ensure a co-ordinated, cross-departmental response”, to aid access to housing, healthcare, employment, education and sanctuary for Afghans arriving in Northern Ireland.

Meanwhile, a Home Office spokesperson told The Detail: “Our immediate priority is to evacuate those in danger in Afghanistan, and in the last week alone we have relocated hundreds of vulnerable individuals in addition to the thousands of people eligible under the Afghan Relocations and Assistance Policy.

“The UK’s new resettlement scheme will offer a route welcoming Afghans most at risk who have been forced to flee the country, prioritising resettling women and girls to the UK, and further details will be released in due course.”