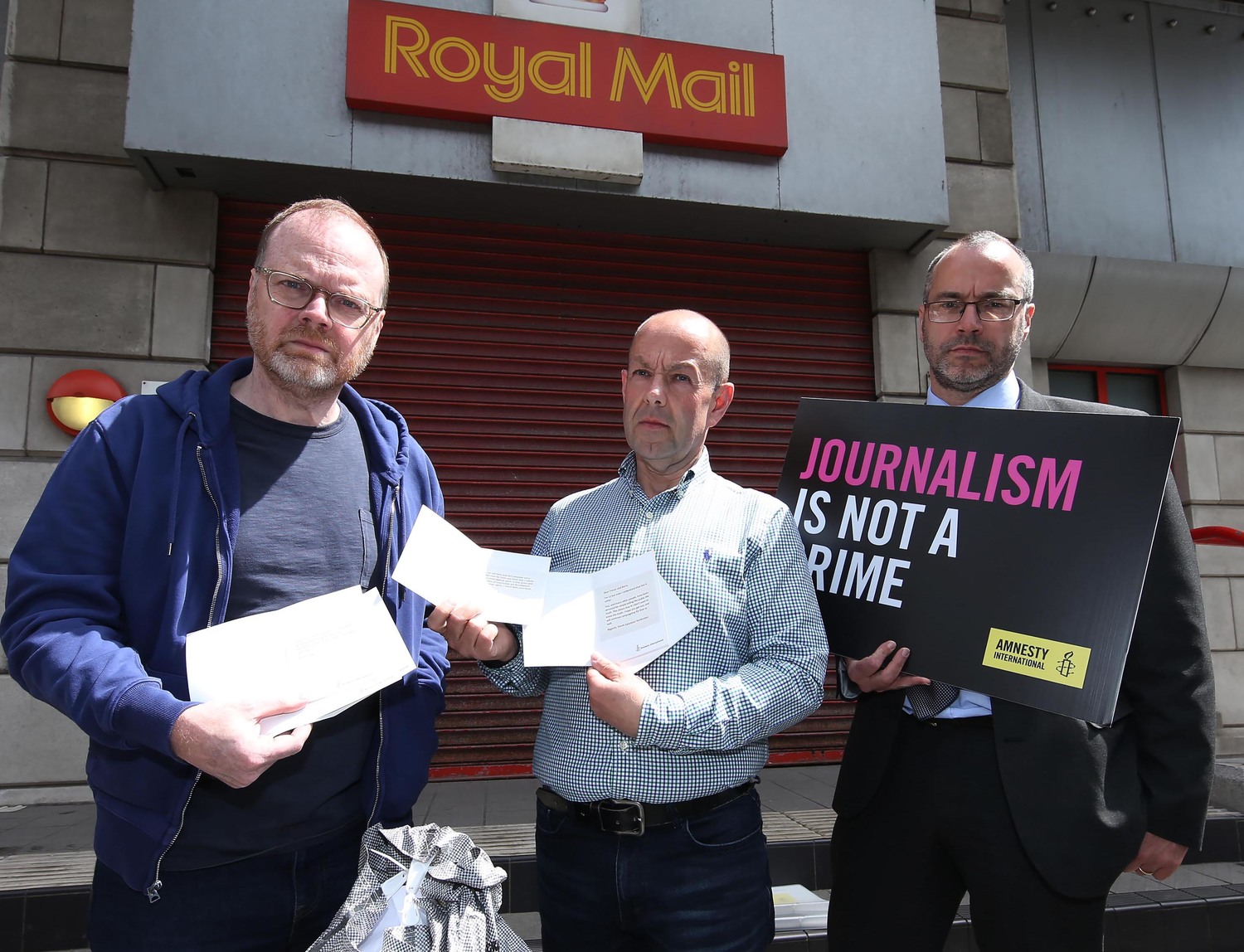 Trevor Birney, Barry McCaffrey and Patrick Corrigan in 2019, after the journalists received 20,000 messages of support from around the world. File photo by Press Eye

A PSNI review into the arrests of two journalists who investigated the Loughinisland massacre must be published in full, Amnesty International has said.

The human rights group has written to PSNI Chief Constable Simon Byrne after a summary of a PSNI review into the case, carried out by a senior barrister, was included in the Policing Board’s annual human rights report, published on Wednesday.

The summary questioned whether police should ever have investigated Trevor Birney and Barry McCaffrey, who were arrested in August 2018 over their 2017 documentary No Stone Unturned.

It also questioned whether the journalists had committed any offences which justified an investigation “let alone the resources that were actually deployed”.

Up to 100 PSNI officers and several officers from Durham Constabulary were involved in the case.

The review found police investigators were not properly objective and looked at minor issues in the case “through an overly suspicious lens”.

Despite the seriousness of the case, the full PSNI review, which looked at major failures by police and any lessons raised, has never been published, even though it was completed last spring.

It is understood that no police officer has been sanctioned or disciplined over the case.

“Amnesty International has written to the Chief Constable to request the publication of the full report into this disturbing case,” he said.

“Two journalists were arrested, had their homes and offices raided and their files and computers seized in an operation which proved to be unlawful.

“Yet, it seems, no-one within the police has been held accountable.

“This is not a private matter for the police to consider behind closed doors. There is an overwhelming public interest in having this report made public.

“We need to understand what went wrong and ensure that it can never happen again.

“The day of dawn raids at the homes of journalists in Northern Ireland must be over.”

The arrests came after then PSNI Chief Constable George Hamilton asked Durham Constabulary to investigate the potential theft or leaking of documents after a draft copy of a Police Ombudsman’s report into the Loughinisland atrocity was shown in the 2017 film.

Six Catholic men were killed in a UVF attack on The Heights bar in Loughinisland, Co Down, in June 1994.

The High Court in Belfast later found that the warrant issued for searches of the documentary makers’ homes and offices and the seizing of journalistic material was unlawful.

The investigation into the journalists was dropped, with substantial damages paid to both men and a public apology by Chief Constable Simon Byrne.

The exact cost of the case, including the extensive policing operation and legal fees, has never been revealed. However, the final bill is thought to have run to several million pounds.

Alliance assembly member Nuala McAllister, who sits on the Policing Board, said she would raise the case with the Chief Constable next month.

She said the case had been discussed by the Policing Board before she joined.

“However, given the recent publication of the human rights report, it is clear there are still concerns and questions relating to it," she said.

"I will be reaching out to Barry McCaffrey and Trevor Birney to assure them this matter will be raised further, and I will be asking questions to the Chief Constable at the next full Policing Board meeting in February.”

SDLP MLA and Policing Board member Mark H Durkan said the PSNI’s full review must be published so it can be scrutinised by the board.

“Given the PSNI’s own identification of failures in relation to the case and the subsequent apology from Chief Constable Simon Byrne I cannot understand why this important information is being withheld,” he said.

“It is important that Policing Board members and others have the opportunity to scrutinise the review and to ensure that any issues identified in the initial investigation are addressed and to make sure lessons are learned.

“If we are ever going to properly move forward then the PSNI and its leadership need to hold their hands up, reveal what actions have been taken as a result of this review and commit to making sure this incident is never repeated in future.” 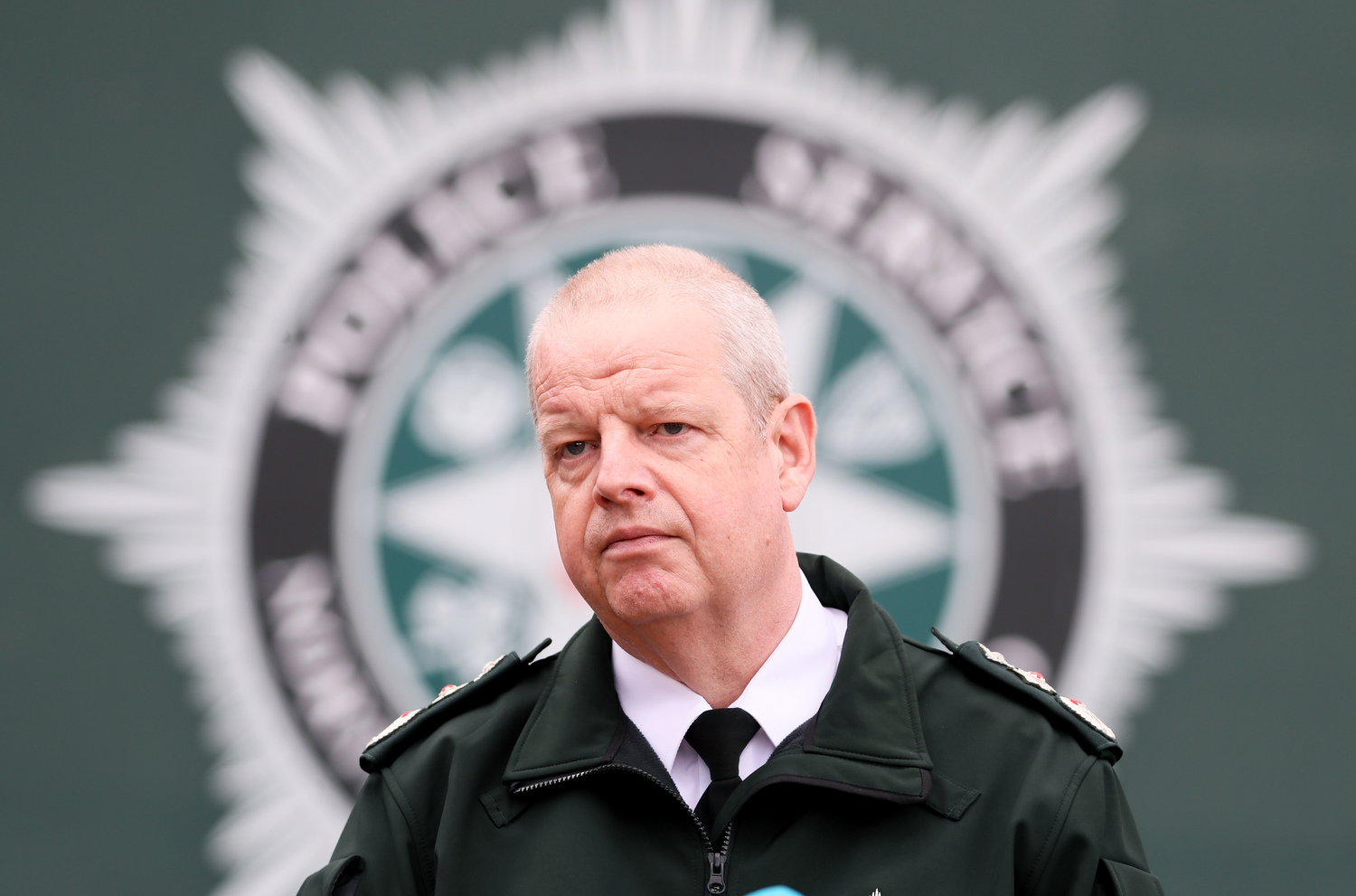 The PSNI review was initiated in February 2021 and completed last spring.

However, Mr Birney and Mr McCaffrey said they were never asked to participate, nor were they told that the review had finished, or what its findings were.

They only discovered the review had been completed when the Policing Board report was published on Wednesday.

The Detail asked the board why it did not inform the journalists that serious failings highlighted in their case would be mentioned in its annual human rights report.

A spokeswoman said: “Where there are policy and procedural changes identified as a result of judgements delivered in court cases, it is not usual practice to report back to the individuals initiating proceedings on the actions taken to redress police failings in a case.

“These are addressed through civil proceedings and in this case settlement was completed in November 2020.

“It is the board’s oversight responsibility to address with the PSNI actions taken and then report back to the community, how failings or issues identified in judgments delivered, or through other proceedings or reports, have been actioned.”