Analysis: Brexit has split the UK cabinet - but is it also dividing communities? 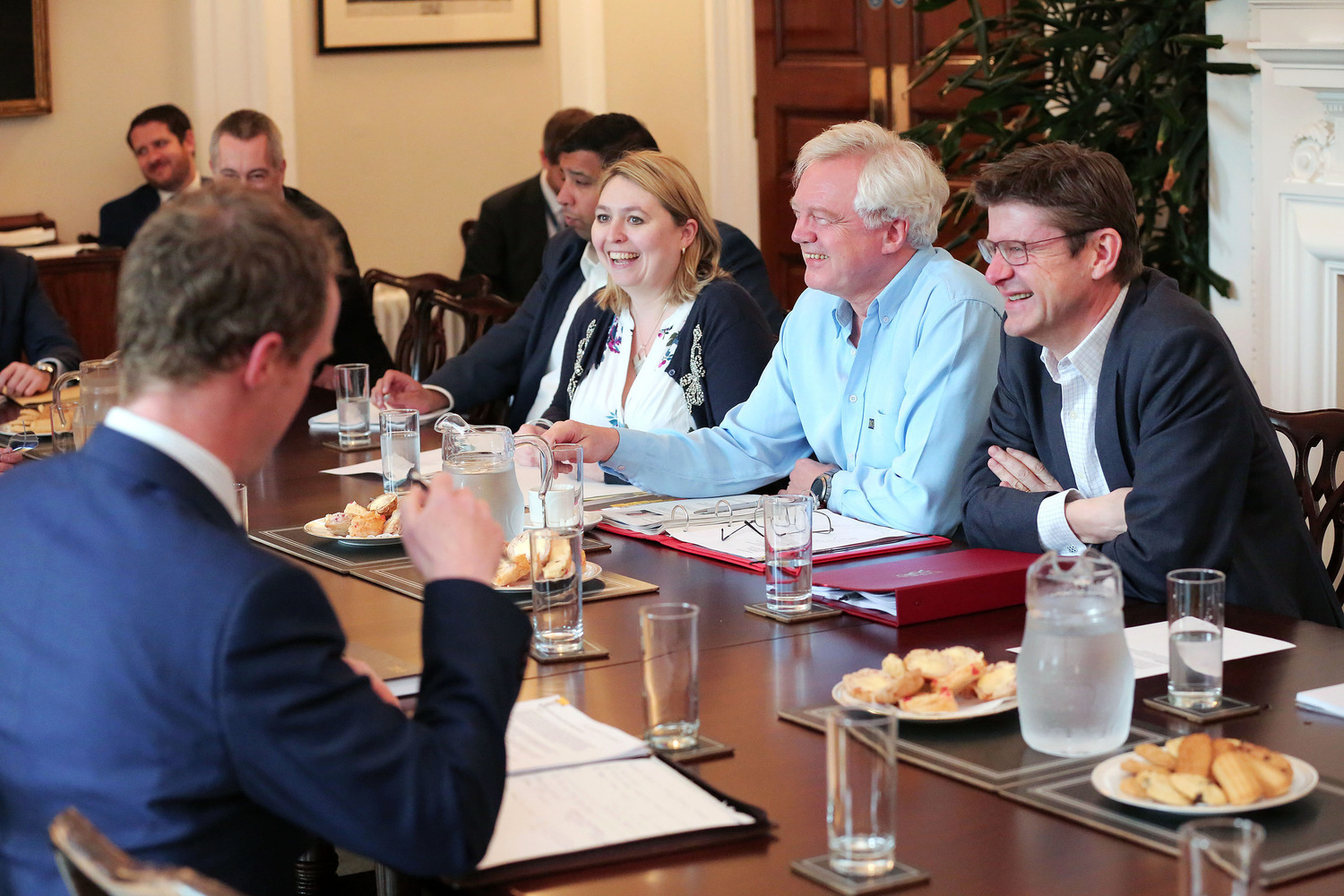 That was then: David Davis at a meeting in Northern Ireland in May discussing Brexit with business leaders. Last night he resigned from the UK government.

AS the David Davis and Boris Johnson resignations confirm, Brexit is a divisive issue. It represents the most significant UK political faultline in decades – in fact, since the UK joined what was then the European Economic Community in 1973. Brexit has created what could potentially be a fatal split in both the UK’s major parties – ironically at a time when there is no large third party to exploit the divisions. Theresa May had successfully bullied her Cabinet into reluctant accord at Chequers, but the resignation of her government colleagues may herald the outbreak of full-blown Conservative civil war.

The Brexit division is symptomatic of, yet different to, what is happening internationally in politics. It is different in the sense that other western European nations have a traditional Christian democrat Vs social democrat competition, which is being disrupted by newly emerging populist parties that do not come from a traditional left or right wing perspective. It is also different in the sense that Labour remains a strong party in Britain, while other social democrat parties are being humiliated across Europe.

But Brexit is similar to what is happening in much of Europe and also in the United States in the sense that it is rooted in the emergence of ‘identity politics’. For many voters today, ideology apparently does not matter – it is a contest about the representation of different communities. Trump’s victory was to a significant extent about white men seeking to assert their traditional social dominance over black communities (repudiating the Obama legacy) and feminists. Brexit can be seen as a conflict between predominantly European and Anglo-Saxon cultures.

In England – and Brexit is mostly about tensions within English society – Brexit expresses a sense of anger by communities left behind. The poorest regions of England voted for Brexit, despite objective analysis suggesting they will lose the most. It was an expression of anger by communities that were once thriving from coal mining, steel works and manufacturing who had their incomes and their sense of identity destroyed by de-industrialisation. These were communities badly damaged again by the reduction in real incomes following the Great Recession of 2008 and 2009.

When I interviewed former Greek finance minister Yanis Varoufakis a few months ago, he argued that the underlying cause of Brexit was the failure of English regional policy. He has a point. England contains some of the poorest and some of the richest regions in Europe. Moreover, anyone who has lived a long time in England, or – like me – is English, knows that in addition to the feeling of dispossession, or the fear of change, there can also be an ugly undercurrent of racism.

But when it comes to identity politics, there is perhaps no one who does it better than Northern Ireland. And Brexit is adding another layer of nastiness into this. Differences have become boiled down to unionists as ‘leavers’ and nationalists and republicans as ‘remainers’. (This is simplistic: many unionists voted remain and some republicans voted leave.)

Community relations got better after the Good Friday Agreement. But it is significant that one phrase is used repeatedly to describe what is happening in Northern Ireland following the Brexit vote. Things are “going backwards”.

That phrase was used by David Holloway, director of the Northern Ireland organisation Community Dialogue. He says that the combined effects of the collapse of power sharing at Stormont and the tensions over Brexit are creating serious tensions between communities. The border has suddenly become important again. “There is a palpable sense of community retrenchment into traditional unionist and nationalist positions,” says Holloway. “Things are becoming black and white again, where they had blurred at the edges.”

The phrase that things are ‘going backwards’ was also used by teenagers and young adults, consulted by NI’s Children’s Law Centre. For many of them, the division is between the young and the old. Anger is expressed that young people, below the voting age, had their life chances reduced by the voting decisions of older adults. That anger has become something like despair for many teenagers from other EU nations who have moved here and now expect to be forced to depart. And despite police figures showing a long-term downward trend in racial attacks in Northern Ireland, the experience of the contributors was that tension has grown for nationals of other EU countries – including Roma.

The Brexit referendum was conducted without subtlety and featured claims that were typically unverified and often false. It had an immediate and substantial impact on those most affected – the under 18s and EU nationals living in the UK – who had no say in the outcome. And the region most affected – Northern Ireland – was barely considered in the debate in Britain. It is a toxic combination that has inevitably increased tension between communities all over the UK, but particularly in Northern Ireland. These factors also mean the Brexit division is based more on emotion than reason. This is the most dangerous division of all - as Northern Ireland knows only too well.