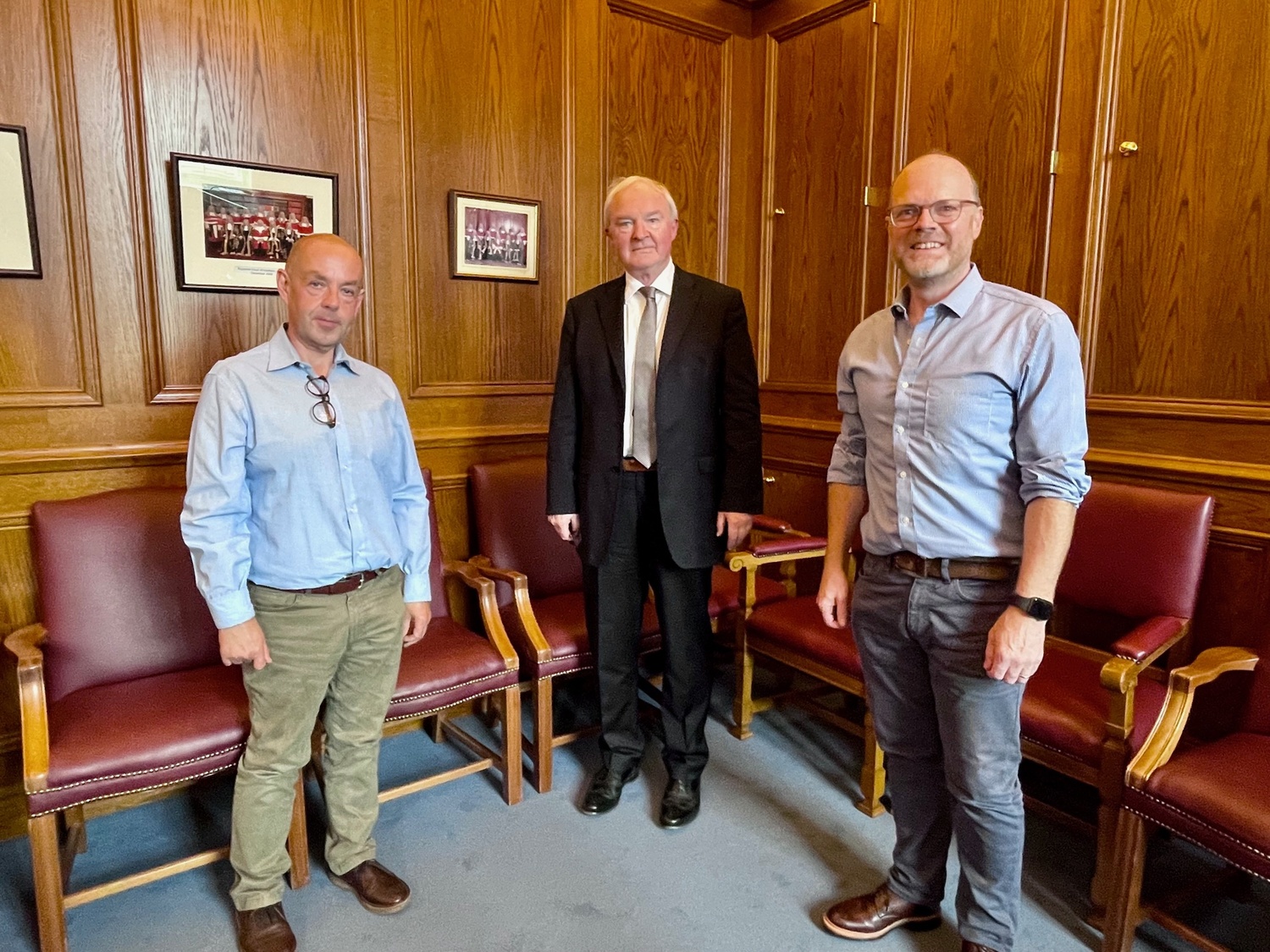 AS children one of the first lessons we are taught is to say thank you for any gesture of kindness which comes our way.

While we may not succeed in always remembering to acknowledge those acts of kindness, it is still important to make the effort.

Try and think of an instance in your life when you were expressly forbidden to thank someone for the kindness they have shown you!

For three years Trevor Birney and I carried this burden of imposed muteness – until now I hoped.

We have been regular visitors to this particular building many times since August 31, 2018.

Today a plain clothed policeman punches a keypad on the doors marked private.

These are the rooms which the public rarely get to visit.

Without any further questions we are ushered through and find ourselves in the private meeting rooms of senior judges at the Royal Courts of Justice.

It is a long way from our previous court appearances in this building when we had been wrongly accused of committing serious acts of near treason, which our accusers claimed threatened the very security of the state.

Standing nervously in these judges’ rooms now my nostrils are filled with the smell of furniture polish and Windolene.

I am transported back to early childhood and summers spent with an elderly aunt who worked as a priest’s house keeper.

It was a time when the innocence of youth could not prepare you for the perils of the future.

As we wait for the subject of our interview we peruse the photographs which adorn the wood paneled walls.

If those walls could speak, what secrets would they divulge about the trials that may have been discussed in this room.

The photographs are history of the judicial journey travelled by Northern Ireland’s most senior judges down through the decades.

Only two photos, dating from 2014, break with tradition and include two female judges.

Trevor and I have sat in the courtrooms of this building countless times over the last three years.

In the deafening silence of those courtrooms before those hearings got underway I could often hear the sound of my own heart pounding.

The uncertainty of not knowing what lies ahead, and that it may not end positively, is no tonic for a man’s health.

The silence would be broken by the unannounced opening of a door from the judges’ chambers and the booming voice of a court official ordering: “All stand.”

Today the door to the meeting room opens quietly without warning or pomp.

This is the world of Covid 2021. No one shouts anymore.

Our host sports the obligatory face covering rather than a scarlet robe or horse hair wig.

Each one of us is unsure of the appropriate next move.

A handshake? An elbow bump? A head bow?

In the end we all settle on a verbal mumbled greeting behind our respective masks.

We have been in the same room many times before in recent years but have never actually spoken.

I suspect the first time Northern Ireland’s Lord Chief Justice Sir Declan Morgan first heard our names was on the afternoon of August 31, 2018.

That was the Friday afternoon our lawyers launched a court challenge against the legality of the PSNI’s decision to search our homes and offices.

We couldn’t be in court that day.

We were otherwise engaged, being held in police cells just a few hundreds yards away on May Street.

Over the following three-year period we would come face to face with the Lord Chief Justice every three months.

Often he was accompanied at these hearings by Lord Justice Seamus Treacy on his right and Mrs Justice Siobhan Keegan on his left.

On each occasion, owing to a combination of our middle-aged men hearing difficulties and the poor acoustics of the room, court staff would provide Trevor and I with headphones.

Throughout all those hearings Trevor and I never got to utter a single word.

Despite having spent countless hours and days in front of the Lord Chief Justice, we had never actually exchanged a single syllable.

It is hard to explain the impact this court case had on the lives of Trevor and myself.

When our case opened in May 2019 our professional and personal reputations literally went on trial.

If we lost this case journalism and press freedom would not only have been set back decades but Trevor and myself could have ended up behind bars, guilty of having broken the Official Secrets Act.

Our journalistic lives were literally on the line.

There were some moments during the case that caused me concern.

During one day of the hearing the Lord Chief Justice questioned if the prosecution didn’t already have enough evidence against myself for a prosecution.

During a break I chastised my barrister for not having challenged the Lord Chief Justice’s comments.

My counsel reassured me there was nothing to worry about.

His words did little to settle my nerves.

The sleepless night that followed was an unwelcome house guest.

From then on I watch the Lord Chief Justice’s every body movement for the slightest sign of encouragement.

I am unlikely to become the world’s authority on the science of kinesics any time soon.

On the final day of the hearing Sir Declan took the unusual step of delivering an almost immediate verdict.

In such high profile cases verdicts aren’t usually delivered for weeks and often months, as judges deliberate over every important detail of the case.

The longer the wait for the verdict, the more nervous the defendant becomes.

But on that Friday May 31, 2019 it took the North’s most senior judges less than five minutes to inform a packed courtroom that in their esteemed opinion Trevor and myself had acted entirely lawfully in everything we had done and that our actions to protect sources had been completely justified.

It was a massive endorsement for responsible journalism.

I shook hands with as many people as possible in court that day, including one of the detectives who had interrogated me.

But there was no opportunity to thank the judges.

Until that day of our court victory I had felt like someone who’d fallen overboard at sea.

The judges’ vindication of our actions felt like an arm had reached down into the water and plucked us from danger just as we were about to go under for the last time.

I asked my legal team if it would be appropriate to send a card to thank the judges for their ruling but was advised this was not the done thing.

It is hard to describe the frustration of not being able to thank someone who you feel literally saved your career, if not your life.

Here we now were in a room with the Lord Chief Justice, just us and him.

Was this the occasion to set the record straight?

Professional courtesy and the rules of the law meant we still couldn’t discuss the case that had bound us together for the last three years.

There was an elephant in the room and I was struggling to avoid the swish of its big trunk and blurting out an inappropriate expression of the debt of gratitude that I felt.

Back and forth the Lord Chief Justice dutifully answered various questions about the British Government’s attempts to stop Troubles’ related inquests, proposals to allow informers to engage in unlawful paramilitary crimes and plans to alter the Official Secrets Act to prevent journalists from exposing state wrong doings.

Respect for the integrity of each other’s professions meant our case was never discussed.

The unspoken words that were left hanging in the air were all that needed to be said on this occasion.

This was Declan Morgan’s final interview as Lord Chief Justice.

Today, he steps down and retires as Northern Ireland’s most senior law man after more than a decade at the helm.

It will be exactly three years to the day since our worlds collided in that Belfast court room.

As the interview wound to a close the cameraman filming the interview inquired if any of the three of us would mind having a photograph taken together.

I’m not sure if the cameraman was aware of the events which bound the three of us together.

Each of us posed awkwardly not wanting to embarrass the others.

It was enough for the image to be captured for posterity.

We thanked Sir Declan for his time and wished him well in retirement.

In our campaign to defend press freedom Trevor and I had found ourselves photographed with presidents, future prime ministers, pop stars and Oscar winning directors.

But the photograph we shared that day and the unspoken words that remain are the memories that I will hold dearest.

I would have liked to have thanked him for the verdict the judges delivered in our case, for the legal protections that the judgment now provides for reputable journalism.

I suspect his professional integrity would have politely but firmly brushed those thanks aside and insisted that judges were merely following the law and that justice had to be seen to be done.

We will never know.