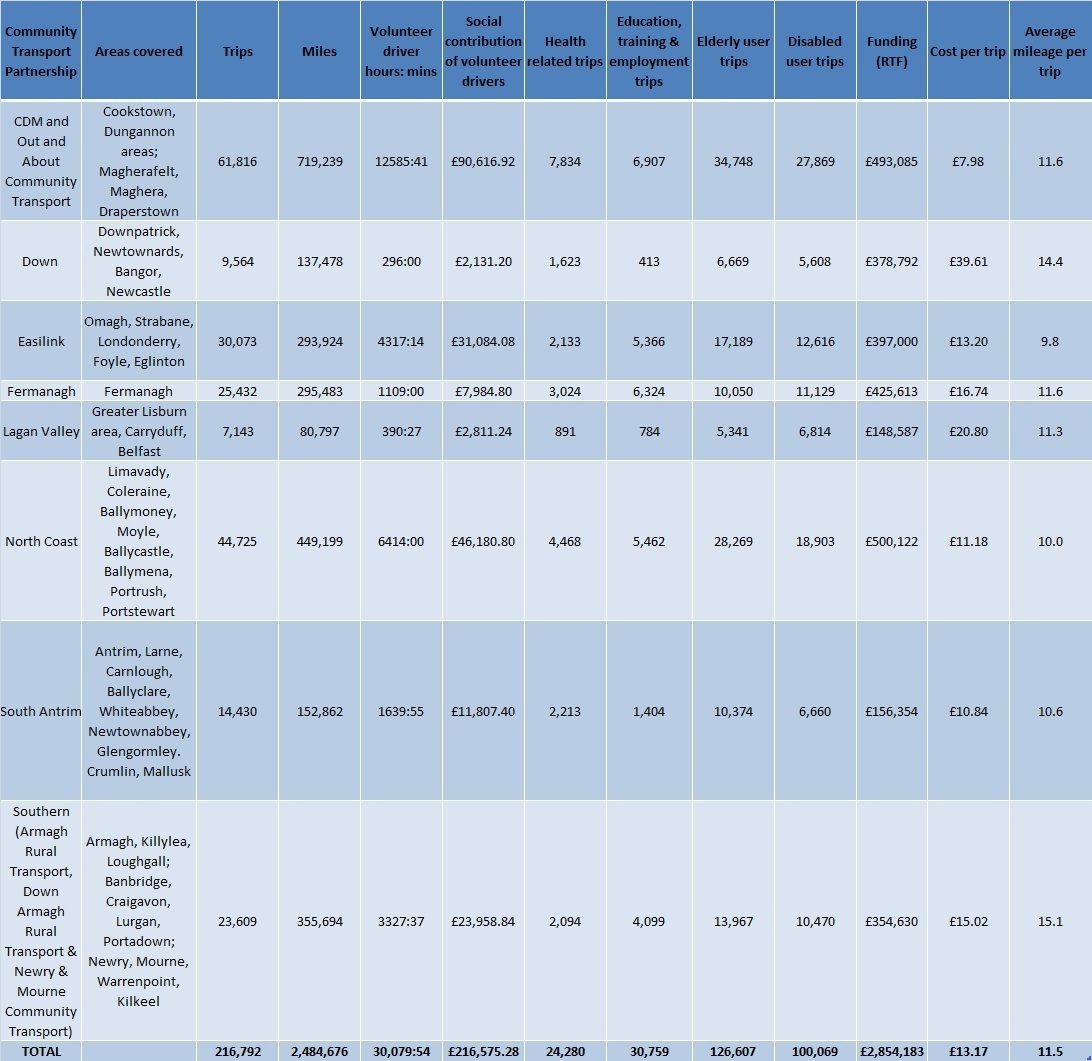 AN analysis of each of the eight community transport partnerships’ data shows the significant impact the scheme is having in some of the most rural areas of Northern Ireland.

In 2015/16 the CDM partnership, which includes Out and About Community Transport, provided the most trips (61,816) – that equates to 237 daily weekday journeys in the Cookstown, Dungannon, Magherafelt, Maghera and Draperstown area.

The statistics also indicate how dependent elderly passengers are on the voluntary service, with the number of trips taken by older users ranging from 5,341 in the Lagan Valley area (75% of its trips) to 34,748 in Mid Ulster (56% of CDM’s trips).

Disabled users are also heavily reliant on the service according to the figures, again with 5,608 trips taken by people with disabilities in Down (59% of its trips) and 27,869 by CDM users (45%).

Last year the partnerships covered almost 2.5 million miles – the equivalent of 10 trips around the world - to facilitate access to goods and services for rural passengers including shops, health appointments, social outings and education/training/employment. This includes the miles covered to reach passengers.

The average mileage per trip ranged from 9.8 miles (Easilink, which covers the North West) to 15.1 miles in the Southern partnership, which covers Newry and Mourne areas. This indicates just how isolated some passengers are from everyday facilities.

Although there are significant variations in the cost per trip, calculated by dividing the funding by the number of trips. It ranged from £7.98 (CDM)) to £39.61 (Down). The data shows that the partnerships which utilised volunteer car drivers most had the lowest costs per trip.

Anita Flanagan, manager of Fermanagh Community Transport, explained that these volunteers are “vital to the service we deliver”.

She said: “Because our population is so sparsely populated and with Fermanagh being the most rural place in Northern Ireland, it’s a long distance for us to send a bus from Enniskillen to Belleek. It is 25 miles.

“If someone from Garrison or Cashel wants to go the doctors in Belleek and we don’t have a bus in that area rather than send a bus down from Enniskillen we will ask one of our volunteers to go and pick them up.

“Roughly about 25% of the journeys that we carry out would be provided by volunteers.”

Tim Cairns, director of policy and public affairs at the Community Transport Association, added: “Our volunteers are amazing people. Community transport couldn’t be delivered without the volunteers that we have."