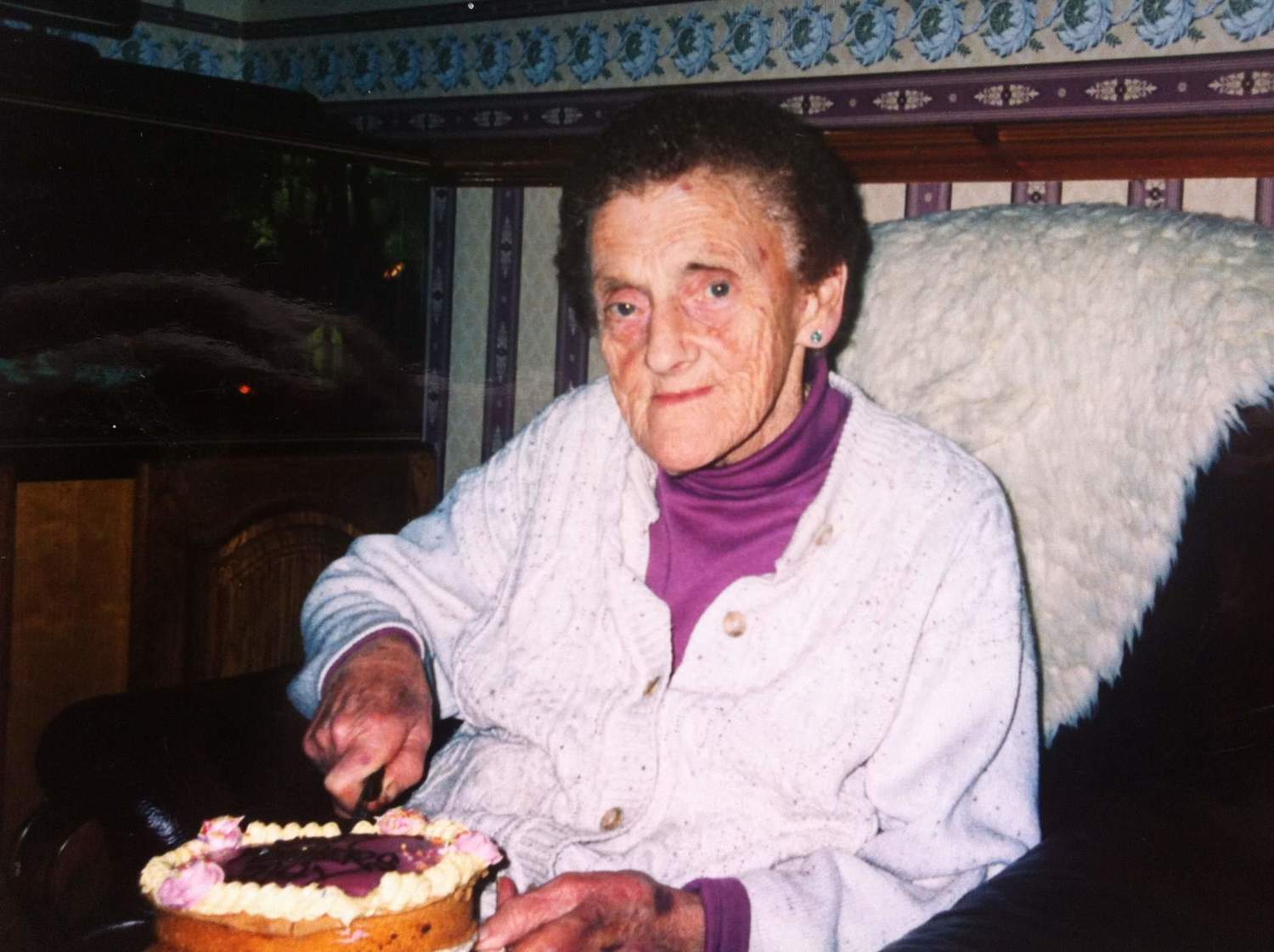 A NORTHERN Ireland health trust has been strongly criticised for its investigation into how an elderly woman’s body suffered multiple fractures after her death in hospital, according to a report on the controversy presented to the bereaved family.

Relatives of 78-year-old Maureen McGinley from Strabane in Co Tyrone took their complaint to a public services watchdog to discover how their mother’s body sustained 34 fractures after her death in Altnagelvin hospital in Derry/Londonderry in January 2007.

Now The Detail can reveal that an independent investigation carried out by the Northern Ireland Public Service Ombudsman has described the Western Health and Social Care Trust’s investigation as “wholly inadequate”.

Commenting on how the trust handled Mrs McGinley’s case, the report said: “It is impossible to understand why the trust, one of whom’s stated aims is to learn lessons from complaints, did not adequately investigate this serious adverse incident which was also attracting significant public attention and indeed serious adverse comment that was having serious implications for the public standing of the trust.”

The ombudsman upheld the McGinley family’s complaint in full and found “maladministration” on the part of the trust in relation to how it carried out investigations into the incident.

The report concluded the fractures were most likely to have been caused accidently and ruled out any deliberate actions by staff.

However, it was critical of how the trust’s investigation was carried out and recommended an apology be made to the McGinley family.

The ombudsman also stated that the trust should pay £2,500 to each of Mrs McGinley’s eight children for “the injustice of upset, distress and uncertainty caused by the failure to conduct an adequate investigation as to the possible causes of the post mortem fractures”.

Reports by the Northern Ireland Public Service Ombudsman (NIPSO) are normally kept confidential as the office does not routinely publish its investigations.

However because of the overriding public interest issues raised during the investigation into Mrs McGinley’s case, The Detail is today publishing the main findings contained in the report. We are not reporting its contents in full for legal reasons.

The family of Mrs McGinley passed the findings to The Detail after her relatives were given the report by the ombudsman at the end of December, just days before the ten year anniversary of their mother’s death.

The report refers to ‘Mary McGinley’ but she was known to her family as Maureen.

Speaking to The Detail about his mother’s case Martin McGinley said: “Ten years is a very long time to wait and it has taken its toll on our family. We haven’t been able to grieve properly, there’s barely a day that has gone by that it hasn’t been on my mind.

“We welcome the report as we’ve found out more from it than we have known over the last decade. At the end of the day our mother is greatly missed and it’s important to us that this issue is raised in public as we hope no other family has to go through what we have.”

The ombudsman said it was not possible to determine the exact cause of the fractures but instead outlined a number of potential causes.

The report stated that the fractures were most likely to have occurred at some point during the ‘Last Offices’ performed on Mrs McGinley’s body.

This is a procedure carried out soon after the death of a patient and includes preparing the body for viewing by relatives such as changing their clothes if necessary.

However as Mrs McGinley had osteoporosis, a condition which caused her to have weak bones, the ombudsman concluded that the fractures were most likely to have been caused accidently and ruled out the possibility of any deliberate actions by staff. 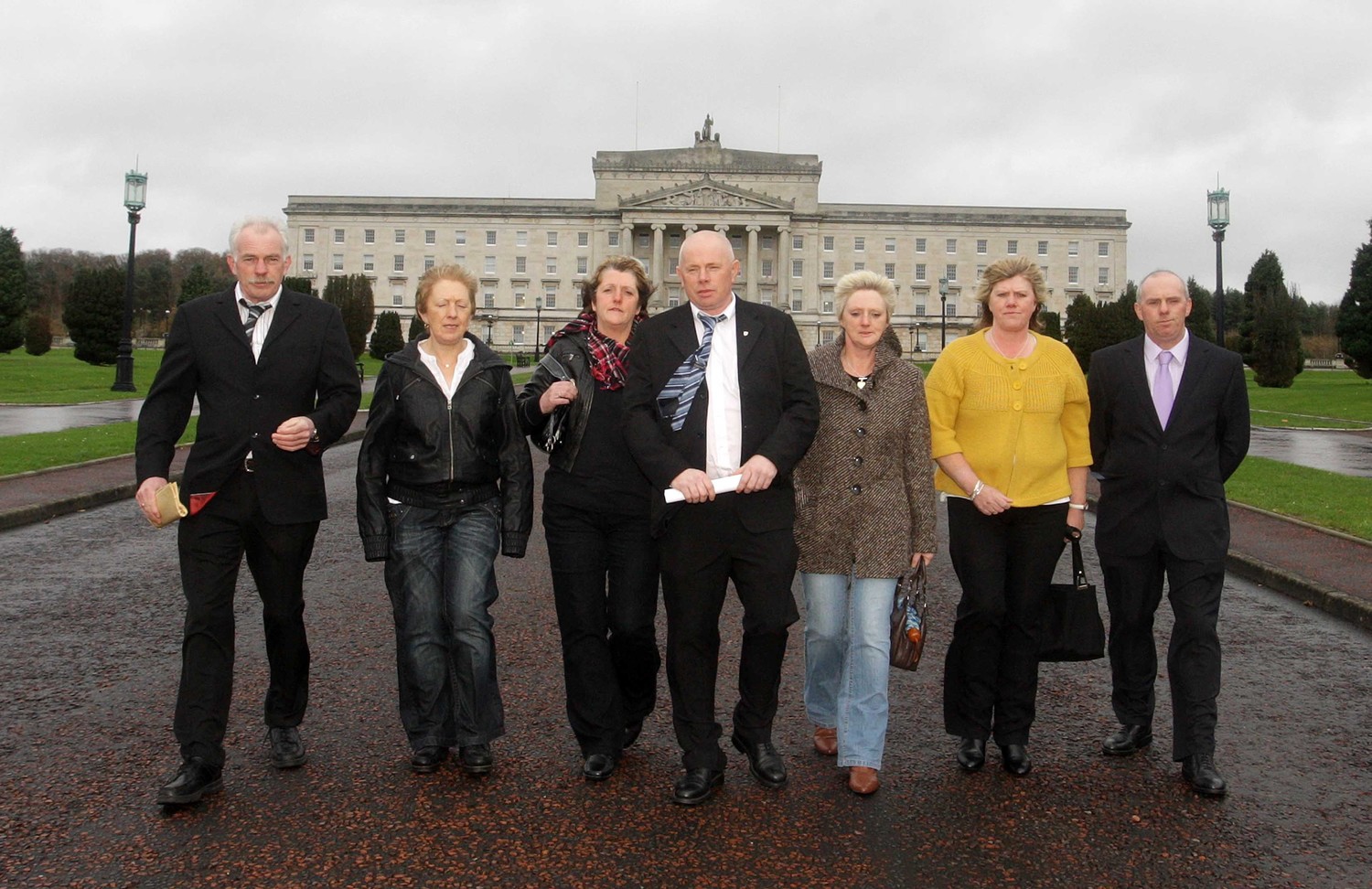 Mrs McGinley’s case caused huge public controversy in the aftermath of the incident, with the family campaigning for a full public inquiry.

When the Department of Health rejected these calls, the decision was debated in the Northern Ireland Assembly.

The bereaved family subsequently lodged a complaint with the ombudsman in 2013.

In response to The Detail’s request for a comment the Western Health and Social Care Trust - which is responsible for Altnagelvin hospital - declined to comment on the content of the report saying that it was confidential.

The document does, however, state that the trust has accepted the main findings of the report and a representative of the trust is quoted in the report as extending condolences and sympathies to the McGinley family.

The representative is also quoted in the document as saying it is the trust’s view that there was “no definitive evidence to prove, or even strongly suggest, that the fractures were caused whilst the body was in the care of the trust and that it is extremely difficult for the trust to provide a definitive explanation as to how the injuries to Mrs McGinley were caused.”

The report further stated that the trust said it had been open and honest with the family at all times and was always committed to ensuring that their concerns would be “fully investigated”.

Commenting on whether or not the concerns raised by Mrs McGinley’s family had been fully investigated the ombudsman's report stated: “This has not been borne out by the facts of this case which in my view reflect a wholly inadequate response.”

We asked the ombudsman’s office to comment further on the findings but it said it did not comment on individual cases. 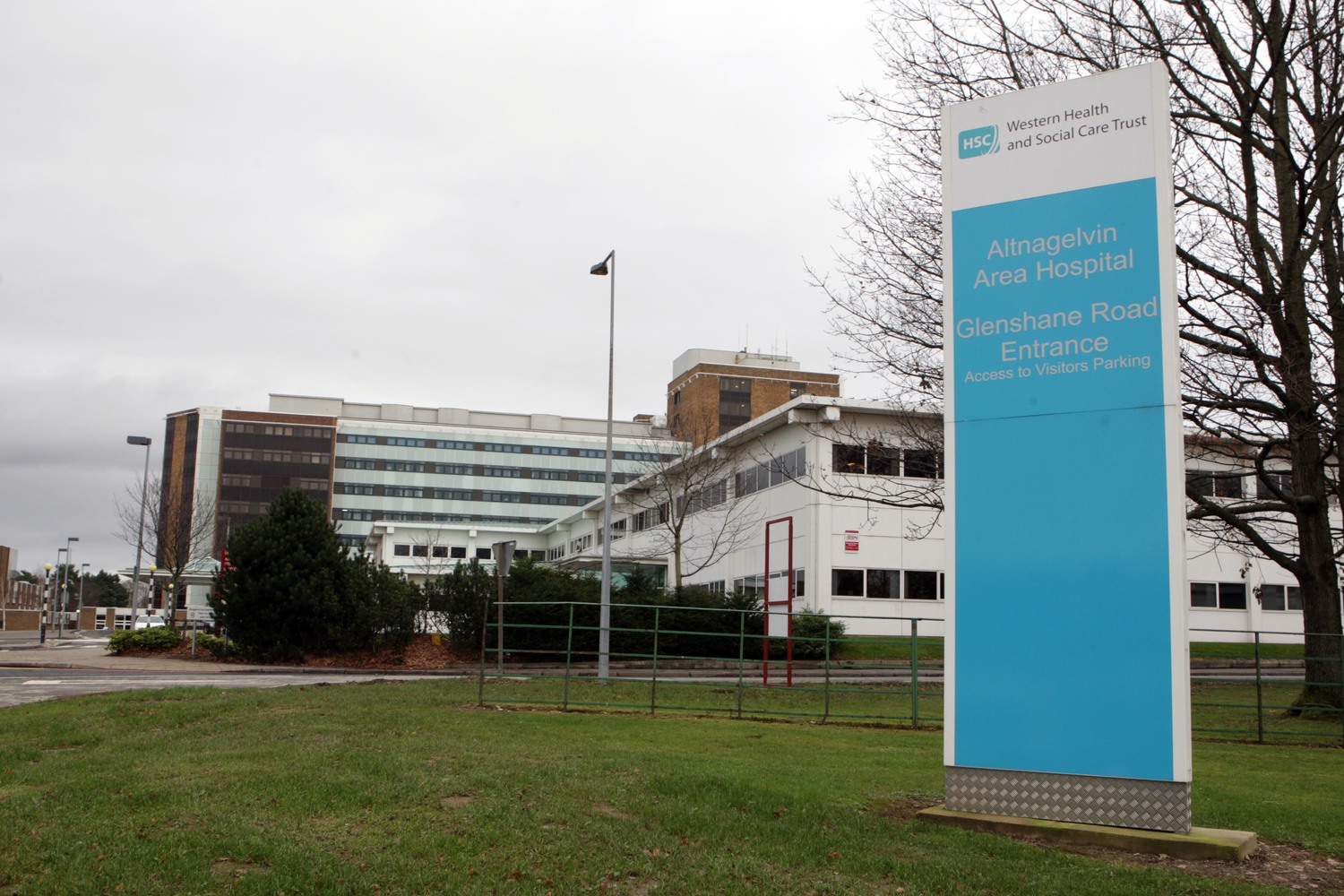 Mrs McGinley passed away at Altnagelvin hospital in January 2007

On December 31, 2006, Mrs McGinley fell out of bed at her home and was brought by ambulance to Altnagelvin Hospital. She sustained a cut to her forehead and had extensive bruising over her left eye and face.

Upon admission she was diagnosed as having atrial fibrillation, a heart condition that causes an irregular and often abnormally fast heart rate. Mrs McGinley subsequently developed pneumonia. Her condition deteriorated and she died three days later.

Internal investigations within the Western Trust and the Coroners’ Office failed to establish how the fractures occurred.

The office was tasked with examining the possible cause of the post mortem injuries as well as assessing the robustness of the Western Trust’s internal investigations.

The ombudsman’s report has found that the trust’s investigations were “wholly inadequate” and criticised it for failing to “keep an open mind in relation to the possible causes of the post mortem fractures”.

The report also highlighted communication failures by the trust to the McGinley family and said that relevant staff were not interviewed face to face and that key actions were not always recorded.

THE HANDLING OF MRS MCGINLEY’S BODY 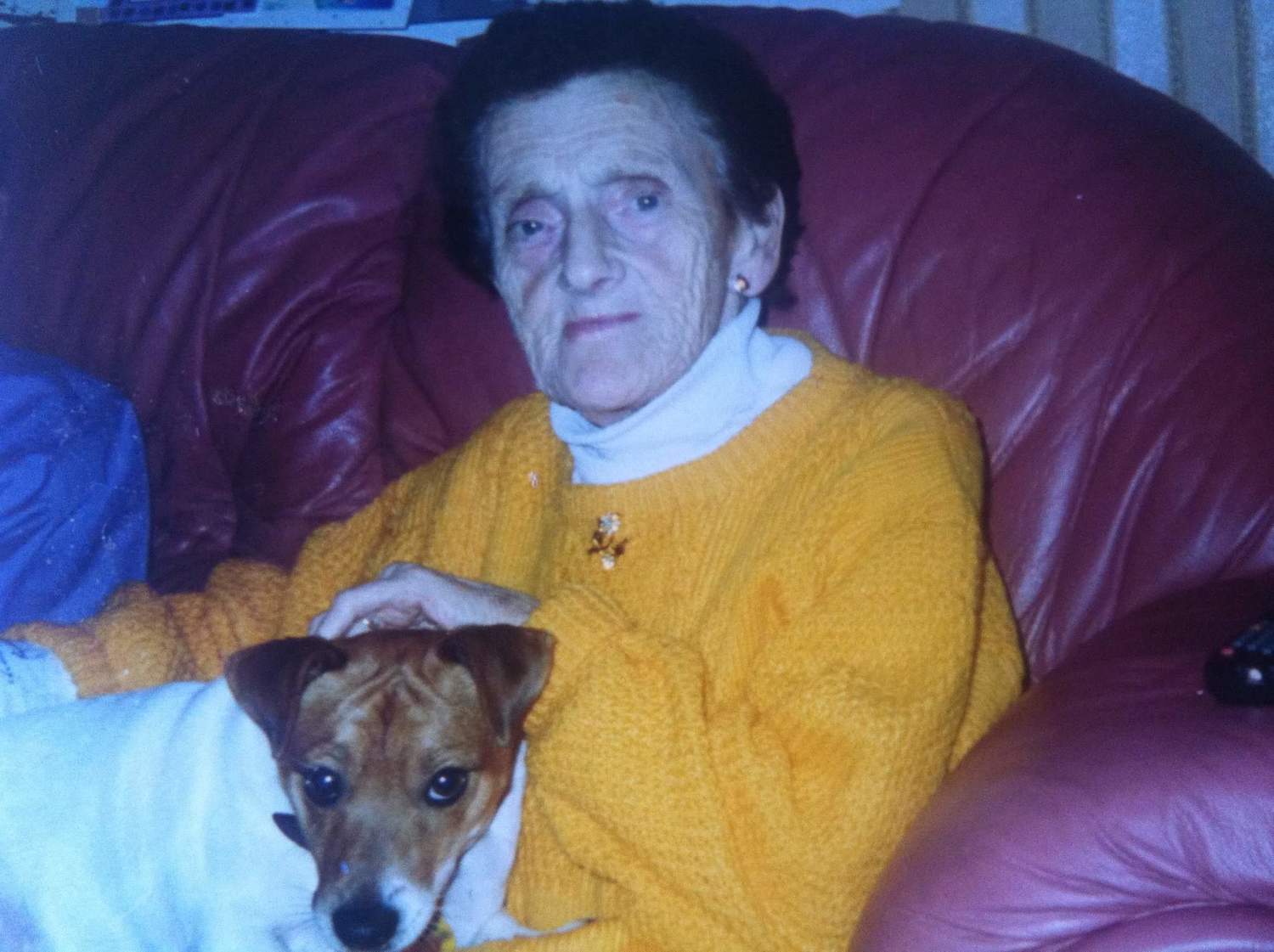 The ombudsman’s report ruled out a number of possible causes of the fractures when Mrs McGinley’s body was in the mortuary or being transferred to the mortuary.

The ombudsman recounted how the McGinley family had been contacted by a number of whistleblowers claiming to know the circumstances that led to her injuries.

In one instance the family were informed that a trolley transporting their late mother had hit a wall resulting in her body falling from the trolley.

In another claim they were told that bodies were being routinely transported on trolleys with boxes placed on top of them.

The ombudsman found no evidence to support either of these claims.

However the report did outline some potential situations when the injuries could have been sustained during the process known as ‘Last Offices’, which relates to the care provided by hospital staff immediately following the death of a patient.

This includes preparing the body for viewing by relatives and washing the body or changing the deceased person’s clothes if necessary.

During the course of the investigation Mrs McGinley’s family informed the ombudsman that a nightdress worn by their late mother, which had been returned to the family along with other personal effects, was found to have been “ripped up one side”.

The investigation established that there would have been no interventions or procedures performed on Mrs McGinley before her death that should have necessitated her night dress being cut or ripped.

The ombudsman stated that a possible explanation of Mrs McGinley’s injuries is that attempts to remove the nightdress that Mrs McGinley was wearing could have had a role in causing her fractures.

The reported stated: “I consider therefore it is possible that the attempts to remove Mrs McGinley’s nightdress, by rolling her body, may have unknowingly caused Mrs McGinley’s fractures”.

However in an interview with one member of staff the ombudsman’s investigators were told that Mrs McGinley’s body had “already been laid out in the bed”. They also confirmed that that the sheets had been changed and that there was no need to change or wash the patient.

When asked by the investigating officers if Mrs McGinley’s body had been dropped or fallen off the bed while they were in the room, the member of staff replied “no”.

The staff member further told investigators that as Mrs McGinley’s death was expected other staff must have had already made her “comfortable in bed” and she did not require cleaning.

The ombudsman was unable to establish which staff may have been involved in carrying out these duties.

The report was critical of the fact that it had not been recorded in the hospital notes that Last Offices had been performed or who provided that care and at what time Mrs McGinley’s body was removed from the ward.

The ombudsman’s report was also unable to account for what caused the fracture to the bone in Mrs McGinley’s neck, but stated that evidence suggested that it most likely occurred after death.

A number of healthcare experts were commissioned by the ombudsman to try and establish what could have caused the injuries.

The ombudsman’s report outlined the following comments from one of the experts: “Injury may have been sustained in a body this frail without anyone being aware that injury was sustained.

“Even leaning over the body gently could potentially cause rib fractures in an elderly woman with osteoporosis, though deceased, where normal protective muscle tone would be absent. This would not have been audible and would have occurred readily”.

Concluding on the matter the ombudsman said the post mortem fractures were “most likely to have occurred during the performance of Last Offices”.

The report stated: “Without any evidence of the actions of nursing staff in completing the initial part of Last Offices for Mrs McGinley, and the techniques used during that time to move/lift Mrs McGinley’s body, I am unable to rule out the possibility that the post mortem injuries that Mrs McGinley sustained could have occurred in the course of these procedures.”

Commenting on this the ombudsman stated: “The trust’s failure to undertake a timely and adequate investigation into the after death management of Mrs McGinley’s remains by its staff in an attempt to ascertain how the fractures sustained by Mrs McGinley post mortem could have occurred, has made it impossible for any other agency, including my office, to establish the identity of all the trust’s staff who were involved in the performance of Last Offices and what each did in contributing to Mrs McGinley’s after death care.”

The report made a number of recommendations including the need for the Western Trust to reviews its internal investigation procedures within the next six months.