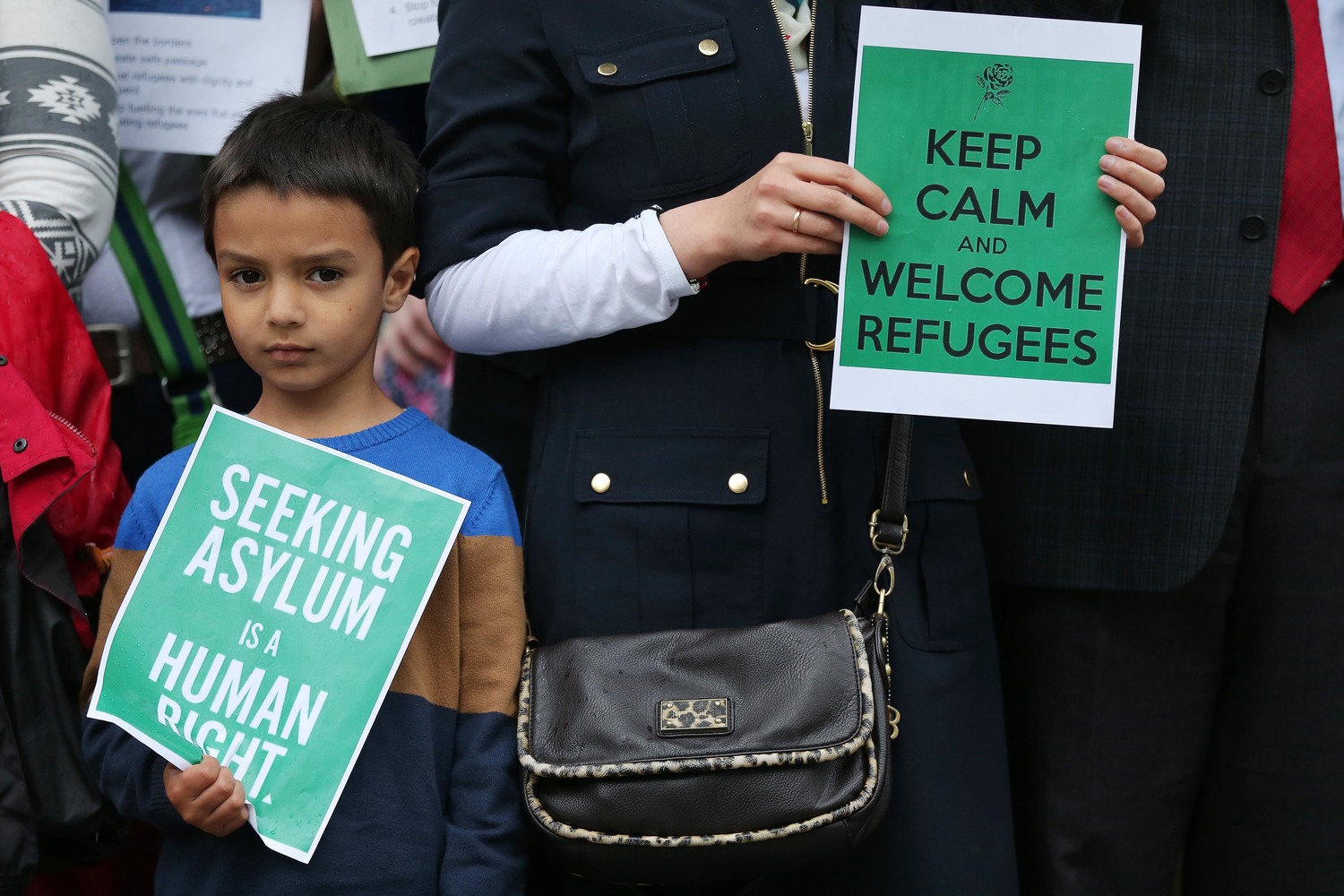 Protestors on the Dublin Road in Belfast. Photo by Kelvin Boyes, Press Eye.

HUMAN rights organisations have raised concerns about how UK plans for immigration law will harm child refugees, asylum-seeking children and victims of child-trafficking in Northern Ireland.

The Belfast-based Children’s Law Centre, which represents the vast majority of separated or unaccompanied asylum seeking children in Northern Ireland, said 96% of these children “would not have been entitled to the protections of full refugee status, if the Nationality and Borders Bill had been in place”.

Concerns about the bill were officially lodged with the Home Office by the Children’s Law Centre in its response to the department’s public consultation on the proposed legislation, which was outlined in the government’s ‘new plan for immigration’.

Every Child Protected Against Trafficking (ECPAT UK) is also concerned about the Home Office’s plans.

The anti-child-trafficking organisation has said the Nationality and Borders Bill includes measures which will impact “all child victims of trafficking as well as all children and young people subject to immigration control”, and will be “particularly detrimental to unaccompanied children who are at significant risk of exploitation”.

ECPAT UK also referenced how aspects of the bill are “dangerous and unworkable”, constituting a “moral and legal failure” to protect vulnerable children, while Amnesty International has said the planned legislation undermines the UK’s requirement to provide stateless children with citizenship.

In addition, the Children’s Law Centre finds the “overarching narrative of criminality and illegality” put forward in the new immigration plans to be “quite remarkable”, given the planned legislation centres on “victims of persecution, torture and trafficking – many of whom are children”.

The children’s rights organisation said: “There is not a single mention of the Home Office’s Section 55 Borders Citizenship and Immigration Act 2009 statutory duty, to protect and safeguard children

“It appears to the Children’s Law Centre that if any thought has been given to the rights of children, such thoughts have been completely dismissed.”

The Children’s Law Centre also said the Nationality and Borders Bill has implications for devolution in Northern Ireland and the organisation has called on local politicians to relay the issues it has raised, in Westminster and with the Home Office.

A spokesperson for The Executive Office told The Detail: “Whilst immigration is not a devolved matter, both the department and the wider refugee and asylum sector have expressed concerns about the Home Office 'new plan for immigration' and associated Nationality and Borders Bill.

"Junior Ministers have met with representatives from the sector and are committed to engaging with Executive colleagues and Home Office ministers on matters of local significance arising from this.”

Meanwhile, the Children’s Law Centre said: “We cannot stress enough the importance of the Northern Ireland Government engaging with the UK Government on this issue to ensure that all relevant matters are considered, including policy, procedural and budget implications.”

The Nationality and Borders Bill is currently at report stage in the House of Commons. As part of the bill, Home Secretary Priti Patel is seeking to introduce a National Age Assessment Board.

Responsibility for age assessments currently lies with social services whose primary duty it is to safeguard children and protect their welfare.

The Children’s Law Centre is concerned that if responsibility for this is shifted to a body established by the Home Office, it’s likely to prioritise immigration-related issues over the rights of vulnerable children.

The organisation has said the proposals leave the door open to “dubious age assessments that are opposed by medical professionals, the UN High Commissioner for Refugees and leading children’s rights organisations” which will “dramatically increase the risk of vulnerable and traumatised children being held in detention centres”.

A statement, released publicly by the Refugee and Migrant Children’s Consortium on behalf of a 15-year-old who was seeking asylum in the UK, gives a sense of what it's like for a young person who has been subjected to an incorrect age assessment.

The teenager, who was placed in a hotel after they were assessed as being older than they were in reality, said: “I was all alone and spent most of my time in my room. I didn’t know where to go or what to do. I was too scared to go outside. I was struggling to sleep whilst I was there because I was so scared of the older people who were there and (I was) anxious about being there.

“I tried to get help from the manager of the hotel if he could help me and maybe get me some games as I was very bored, alone and scared but he didn’t.

“I don’t want anyone to go through what I had to go through. It was a horrible experience to have my age disbelieved.”

Concerns were also raised by the Children’s Law Centre that the Home Office’s plan for a National Age Assessment Board will clash with devolution.

“However, the National Age Assessment Board attempts to supersede this legislation and create a new process for conducting age assessments based on border control.”

Furthermore, the Children’s Law Centre also believes the Home Office’s plan to introduce a ‘one-stop’ process whereby unaccompanied asylum-seeking children will have to “immediately reveal the totality of abuse and harm they have endured” in order to benefit from the protections to which they are entitled is problematic.

The Children’s Law Centre said: “With many of these children being extremely traumatised, it can often take time for them to ‘open up’ about their experiences of trafficking and abuse. This could now have implications for their access to protections.

“Excluding children from entitlement to safeguarding and protection from abuse is inhumane and a clear breach of Article 3 of the UN Committee on the Rights of the Child and section 55 of the Borders Citizenship and Immigration Act 2009.”

The children’s rights experts added that the Home Office proposal to withdraw financial support for asylum seekers who’ve ‘failed’ to gain status is “deeply worrying” and signals a “system of enforcement driven by the starvation and destitution of children”.

“Then there are additional plans seeking to erode protections for stateless children and raising the standard of proof for persecution,” the Children’s Law Centre continued.

“It is also alarmingly unclear whether detention for non-compliance with immigration rules will apply to children, if separated children and unaccompanied asylum-seeking children will be placed in the newly expanded asylum estate when they turn 18.

“This all paints a bleak picture for the shift towards removing rights and protections from seriously vulnerable, traumatised and at-risk children.”

The Home Office was approached for a comment but did not provide a response.

This report follows news from last week that at least 27 people died while attempting to cross the English Channel, with children amongst the group. Many of the people were believed to be Iraqi Kurds seeking asylum in the UK.

Receive The Detail story alerts by email
The girl on the bridge: How do we deal with mental health crisis in Northern Ireland?
Most new NI poultry farms near protected nature sites