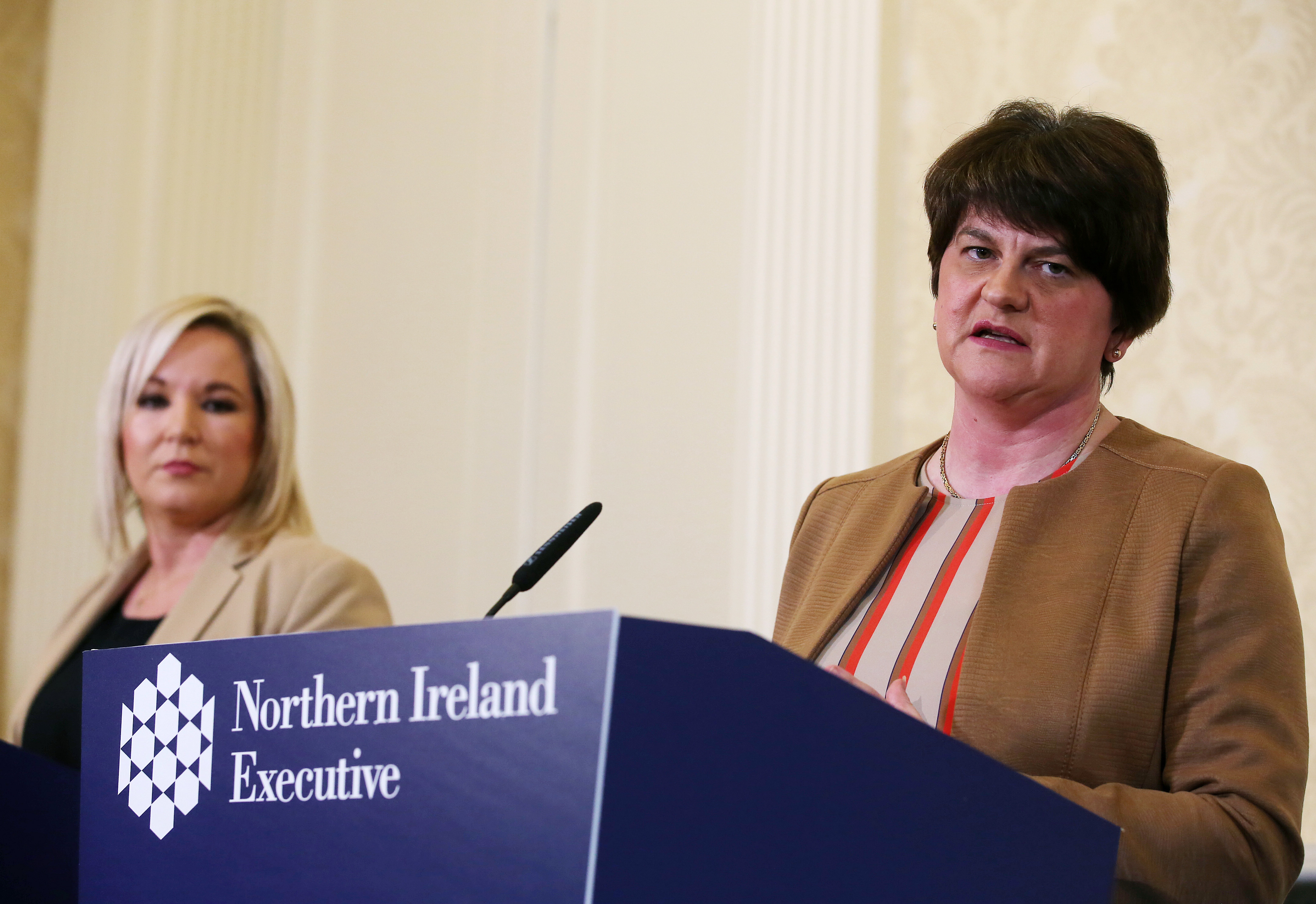 THE First and deputy First Ministers have declined to say when they plan to introduce age discrimination legislation in keeping with Great Britain and the Republic of Ireland.

This is despite political representatives, from each of the parties that are in partnership with the DUP and Sinn Féin in the Stormont Executive, calling for the implementation of this legislation in Northern Ireland.

On the British Government’s website, it states that the Equality Act 2010 ‘includes provisions that ban age discrimination against adults in the provision of services and public functions’.

This law applies in England, Scotland and Wales, but not Northern Ireland.

Last month, The Detail revealed that this means Northern Ireland doesn’t have the same legal protections as the rest of the UK to prevent elderly people from facing discriminatory practices when using the NHS, and other public services, during the COVID-19 crisis.

The Commissioner for Older People for Northern Ireland (COPNI), Eddie Lynch, previously told The Detail he was “conscious about this gap in protection”.

He also confirmed that the situation regarding age discrimination legislation in Northern Ireland compares unfavourably with the Republic of Ireland too.

Mr Lynch called for this legislative gap to be filled “at the earliest opportunity following the pandemic”, but declined to address a follow up question asking why he believes Stormont should wait until after the COVID-19 crisis to implement the legislation.

We put these issues to the Alliance Party, the SDLP and the UUP and, once received, we then directed these parties’ comments to the office of Arlene Foster and Michelle O’Neill.

The Detail also received comments on this subject from MLAs Gerry Carroll, of People Before Profit, and the Green Party’s Rachel Woods. These quotes were also sent to the Executive Office which has responsibility for equality legislation.

All of the referenced parties have criticised the current situation in respect of age discrimination legislation in Northern Ireland.

Despite this, an Executive Office spokesperson told The Detail that officials are still “considering the next steps to progress the introduction” of a bill which would protect against age discrimination for those using goods, facilities and services.

No firm commitment on when the Executive Office aims to have this bill introduced was provided to The Detail.

The Stormont Executive has committed to providing this legislation as far back as its 2011-2015 Programme for Government, but it’s still lacking, meaning elderly people have been left to face this pandemic without protections they would have in Great Britain and the Republic of Ireland.

The Executive Office spokesperson added: “Ministers believe that every life matters, regardless of age.

“All doctors and healthcare professionals must ensure that decisions are taken in line with the best interests of every patient and with fundamental ethical requirements.”

SDLP MLA and Stormont Health Committee Member, Colin McGrath, told The Detail: “We are in the midst of a global pandemic and while it has claimed lives from every walk of life, the impact on our older citizens has been disproportionate and immense.

“It is not tolerable that our elderly citizens have less legal protection than their counterparts in the south of Ireland or in Britain.”

He added that a lack of progress on these legal protections was “another regrettable consequence of three years of no government”.

Mr McGrath continued: “Of course, COVID-19 has brought these issues into sharp focus and we would support updating age discrimination legislation without delay.

“The last few weeks have shown that legislation can be brought very quickly when the will and need is there.

“There is no reason the same cannot be done with this legislation. Our elderly citizens deserve this vital protection.”

Alliance’s North Down MP, Stephen Farry, told us his party is concerned at the legislative gap highlighted by The Detail and that the “COVID-19 crisis brings this deficiency into even sharper focus”.

He continued: “Northern Ireland had been ahead of the rest of the UK regarding equality protections at the time of the Good Friday Agreement (1998) and consideration had been given to a Single Equality Act in 2006 under direct rule, which ultimately wasn’t progressed.

“Northern Ireland fell behind the rest of the UK with the passage of the Equality Act 2010 for Great Britain. Sadly, virtually no equality legislation has been passed under devolution since the restoration in 2007.

“The need for stronger protection for age discrimination has been understood by us and many other campaign groups over this past decade."

People Before Profit MLA and Stormont Health Committee member, Gerry Carroll, told The Detail this gap in protection for elderly people is “very worrying” and that it “merits questions being asked” of Stormont’s COVID-19 response.

“Was this the case because Stormont was willing to allow the for-profit private care model to still operate or was it because there is a serious gap in legislation to protect older people here from abuse and discrimination?

“One thing is clear to me, there was certainly insufficient planning to deal with protecting the vulnerable and elderly, those most at risk from this deadly virus at a time when across the globe health experts warned about the need for a planned approach to tackle this virus.”

Rachel Woods, the Green Party MLA, added: “The Executive must take a considered look at filling any gaps in protections through equality legislation.”

UUP and Department of Health (DoH)

No specific representative from the UUP was put forward to comment.

However, a spokesperson for the party said: “In recent years we have repeatedly criticised the abject failure of consecutive First and deputy First Ministers to bring forward firm proposals to protect against age discrimination in the provision of goods, facilities and services.”

The UUP spokesperson added that this legislation is “greatly needed in Northern Ireland”, however, they also made the claim that “its absence has had no influence on the Northern Ireland response to COVID-19”.

They continued: “Older people in Northern Ireland have not, and will not, be discriminated against during the COVID-19 pandemic.

“Even the very notion of such callousness and insensitivity runs contrary to anything the UUP would ever tolerate or allow to happen.”

The UUP spokesperson also referenced Section 75 of the Northern Ireland Act 1998 which they said ensures public bodies must provide “equality of opportunity between people of all ages”.

Citing Section 75 of the Northern Ireland Act, a DoH spokesperson previously told The Detail they “do not believe that elderly people in Northern Ireland have been left to face this pandemic without the same legal protections, as the rest of the UK, when using health and social care services”.

However, a 2012 report published by the Equality Commission for Northern Ireland, states that while Section 75 of the Northern Ireland “is an important legislative requirement...this legislation does not grant an individual the right to seek redress in a court in circumstances where they have, without justification, been discriminated against by a public authority on the grounds of their age when accessing a service, or when subject to the exercise of public functions”.

The report adds that a change in legislation was required to ensure Northern Ireland “keeps pace” with Great Britain. This change did not happen.

Last month, The Detail reported that there have been concerns over resuscitation policy in Northern Ireland hospitals during the COVID-19 crisis.

We looked at this issue in the context of there being fewer legal protections for elderly people here than in the south of Ireland or in Great Britain.

Rachel Woods from the Green Party told us: “I am concerned that the DoH is not collating data around people, who have passed away due to COVID-19, having signed a DNR (Do Not Resuscitate) order.

“It’s imperative that we take a rights based approach to the issue of DNR Forms.”

None of the other parties, nor the Executive Office, addressed this issue explicitly in the statements they provided to The Detail.

A legal challenge has been launched in the UK against the British Government’s Health Secretary Matt Hancock, over issues relating to resuscitation policy.

The Detail asked COPNI if it had ever received external legal advice, guidance or counsel on such issues, but we were initially told that COPNI “does not confirm...to any media enquiry” whether such expertise is sought.

We questioned why this is the case. COPNI then later claimed it has never received external legal advice, guidance or counsel regarding DNR forms.

One man previously spoke to The Detail about issues his family experienced with DNR forms.

He said: “In circumstances where families cannot get to see their loved ones, it’s even more important for conversations regarding DNR notices to be carried out in a correct way.

“More than ever, it is essential, especially when we don’t have the same legal protections for elderly people here, in hospitals, as in England, Scotland, Wales or the Republic of Ireland.”