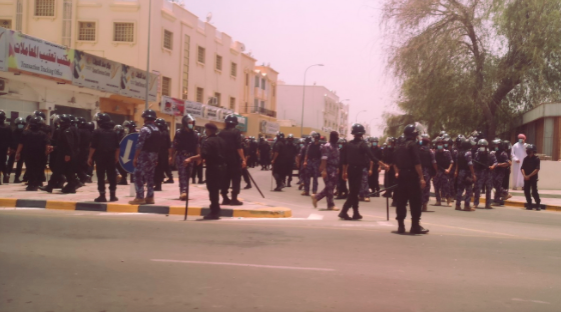 THE Police Service of Northern Ireland (PSNI) has rejected a further request from the Foreign Office to deliver training to Oman's police force, The Detail can reveal.

A spokesperson for the PSNI cited “significant budgetary and resourcing concerns” as the primary reason. However, funding for previous PSNI training exercises came from the UK Government.

The PSNI’s reasoning has also been described by Amnesty International as “staggering” as it did not focus on the poor human rights record of the security forces in Oman.

A number of months later, Oman’s police suppressed the most significant protests the authoritarian Gulf state had seen since the 2011 Arab Spring – as was highlighted in a joint investigation by The Detail and Declassified UK.

This resulted in the PSNI being criticised by Amnesty International and the SDLP’s Dolores Kelly who is a serving member of the Policing Board, as well as by an Omani political exile.

A number of months later, in November 2021, The Detail reported that the PSNI was considering an additional request from the UK’s Foreign Office to provide further training to the Royal Oman Police. However, the PSNI has since rejected this request.

The PSNI told The Detail the force declined to “further support the training at this time”, but also said: “While we note the current situation in Oman, the decision was primarily taken due to significant budgetary and resourcing concerns.

“Furthermore it was felt that at this time it would be inappropriate for the police service to support or advocate the international visits and travel this training could have involved, particularly set against our obligations in relation to the Health Protection Regulations.”

Amnesty International’s Northern Ireland programme director, Patrick Corrigan, told The Detail: “It is welcome news that the PSNI will not be delivering further public order training to Oman given the country’s recent record of suppressing freedom of assembly and expression.

“However, it is staggering that the PSNI is saying that this decision is not because of Omani security forces human rights record, but rather is about financial and travel constraints.”

In addition to the PSNI rejecting the Foreign Office’s Oman request, it was also confirmed in recent months that Police Scotland had decided to stop training Sri Lankan police.

However, unlike the PSNI, it was made clear the Scottish police stopped conducting their training due to human rights concerns in the south Asian country.

PSNI training operations in Oman have been funded by the Foreign Office, via Northern Ireland Co-operation Overseas (NI-CO) – a non-for-profit public body owned by Invest NI. NI-CO told The Detail it “respects the decision of the PSNI” to decline the Foreign Office’s request.

Meanwhile, Amnesty International’s Mr Corrigan said: “Given our concerns about the human rights record of the security forces in Oman, we are concerned that there are serious deficiencies in the approvals process for the PSNI’s overseas police training programme.

“The Chief Constable needs to put in place a rigorous, independent human rights assessment – before and after any overseas training – to test the proposition that such training results in improvement in human rights and policing in that country before agreeing to any future training programmes.”

While the Foreign Office did not comment specifically on the PSNI's decision to decline its Oman training request, a department spokesperson told The Detail: “All engagement between the UK and Oman on security-related issues is in line with the rule of law and respect for human rights.