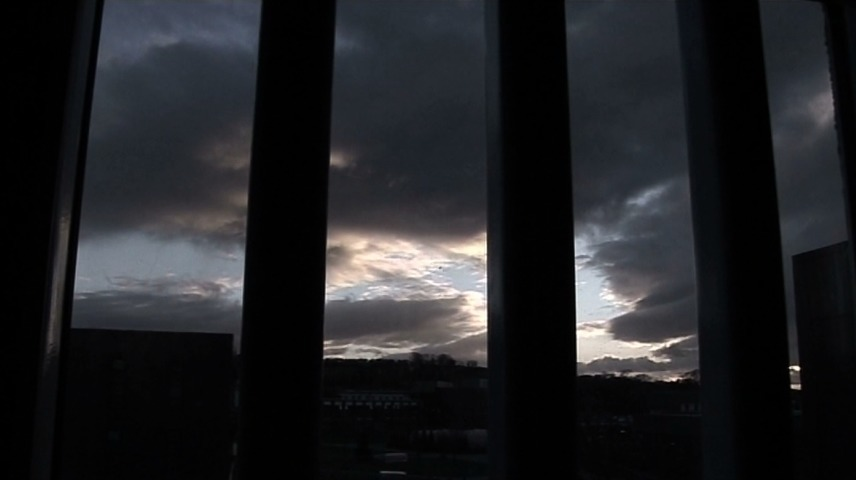 NEARLY a third of the prisoners who died in the Republic of Ireland over the past 10 years were finishing their sentences in the community at the time of their death.

Of the 129 inmates who died south of the Irish border since January 2007, 42 were on temporary release.

This is when prisoners are permitted to serve long periods of their sentence outside jail and was previously used by the Irish Prison Service to address overcrowding concerns.

The mechanism is used differently in Northern Ireland where prisoners can qualify for short periods of temporary leave based on compassionate grounds or to help with rehabilitation as they near the end of their sentence.

Judge Michael Reilly served as the republic’s Inspector of Prisons from 2008 and played a leading role in reforming the system for probing prison deaths.

In an interview with The Detail filmed four days before his sudden death on November 26, and which his family agreed to be published, he stressed the state’s duty of care towards inmates and the need for further information on the high number of temporary release deaths.

“If you have been in prison for a considerable length of time, your tolerance for drugs, if you haven’t been getting them in the prison, is probably a lot lower than it was when you went into prison the first day,” he said.

“It may be if prisoners are released and if they go back to their old stomping grounds, and take up drug taking again, it may be that their low tolerance means that when they take that amount which they might have taken prior to going into prison, that it’s too much for them, and they might die.”

Judge Reilly set the foundations for new systems for gathering information on prison deaths, which he indicated should be built upon to shed light on the deaths of prisoners in the community.

The role of Inspector of Prisons in the republic was held by Judge Michael Reilly until his sudden death last month. He spoke to The Detail four days earlier.

In response to concerns over the high proportion of temporary release deaths, a spokesperson for the Irish Prison Service said it is developing a new prisoner pre-release planning policy to improve the transition of inmates into the community.

The spokesperson added: “The aim of this policy is to provide standard practice for pre-release planning across the Irish Prison Service estate and to ensure the informed and effective transition of the offender from prison to the community.”

Click here for a full statement from the prison service.

Latest daily population statistics from December show there are around 3,600 people in custody at 14 prisons across the south of Ireland. Approximately a further 300 prisoners are on temporary release.

According to The Detail’s analysis based on figures obtained under Freedom of Information legislation:

Fíona Ní Chinnéide, acting Executive Director of the Irish Penal Reform Trust, which campaigns for prison reform, said: “One death in the care of the state is one too many, and a death in prison is traumatic to staff and other prisoners, along with the prisoner’s family and friends.

“There should be supports in place for families, prison staff and other prisoners affected by the death, and greater awareness among media of the impact of news reports on grieving families who have lost their family member.” 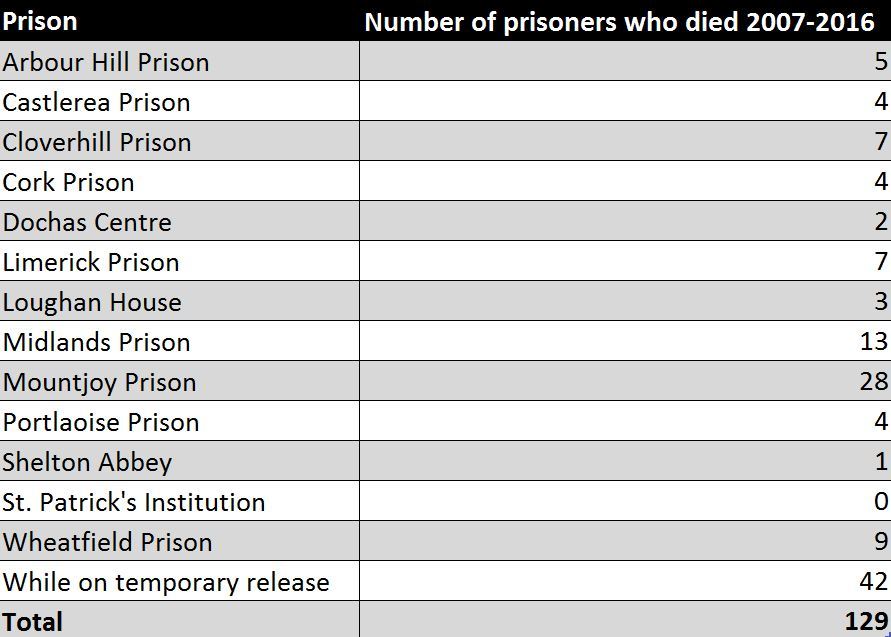 Breakdown by prison of the number of inmates who died in the Republic of Ireland.

Identifying the total number of deaths and obtaining information on the circumstances required placing questions with the Office of the Inspector of Prisons, plus multiple queries to the prison service.

Meanwhile, information on inquests in the Republic of Ireland is not held centrally by government and The Detail found a lack of consistency between coroners over access to prisoner death records.

An Irish government department advised that coroners can respond to requests made under Freedom of Information (FOI) legislation and The Detail placed questions with nine coroners whose offices are believed to cover prison deaths.

Some of the coroners had no such deaths to report, but three declined to provide the relevant data.

They argued they are not covered by FOI, but said records could be obtained under separate legislation for a fee.

Dublin, Laois and Cavan coroners advised The Detail of plans to write to the Irish Government’s Department of Public Expenditure and Reform to question whether they should be subject to Freedom of Information legislation “given the special function performed by them”.

The Detail, meanwhile, is awaiting the outcome of an appeal to the Office of the Information Commissioner in the republic regarding FOI requests to the three coroners’ offices.

From the information that was obtained under FOI, four confirmed that investigations were held into 10 prison deaths in their areas over the last decade.

However the Irish Prison Service said that, across the state over the past 10 years, inquests have taken place in a total of 61 cases where inmates died in prison, with 26 cases outstanding.

This figure does not give the whole picture, however, as it excludes deaths that occurred while prisoners were finishing their sentences in the community.

Academic Colette Barry, from the Dublin Institute of Technology, has extensively researched the state’s oversight of prison deaths and raised concerns over the wider availability of information.

Addressing coroners’ investigations, she said: “Some inquests are covered and some are not covered by the press, so the outcome of an inquest isn't directly publicly available in the first instance.

“If someone starts looking for it they have to seek access from the coroner to access the files like I did and other people have had to do in the past.”

The system of oversight can involve internal reviews by prisons, investigations by gardaí, plus coroners’ inquiries, while Judge Reilly began to conduct further independent investigation of deaths in custody in 2012.

It has also emerged that coroners in the Republic of Ireland could be bound by law to investigate deaths in custody – if legislation first mooted nine years ago is passed.

Unlike UK law, there is no legislation that specifies deaths in custody should be investigated by a coroner, although the republic’s Coroners Act 1962 states deaths should be examined if they are violent, unnatural or sudden.

A spokesman for the Department of Justice and Equality said the proposed legislation, the Coroners Bill 2007, which specifically states an inquest must be held into deaths in custody, is currently under review.

Ms Barry said the authorities should continue to be open to researchers accessing information.

Meanwhile groups campaigning for penal reform said that concerns persist over whether lessons are being learned from prison deaths.

‘NEITHER ROBUST, INDEPENDENT NOR TRANSPARENT’

In 2012 the Republic of Ireland’s prison watchdog extended its remit to independently investigate deaths in custody, amid concerns over the state’s ability to meet international human rights standards on the investigation of jail fatalities.

The late Judge Michael Reilly began investigating prison deaths four years after he took on the role of Inspector of Prisons.

He had been critical of the Irish Prison Service’s internal investigative procedures, describing them as “neither robust, independent nor transparent”. He later accused the organisation of “systemic operational deficiencies”.

Not only did Judge Reilly recognise failings with the state’s investigative process, but he also realised the need for a public database to record deaths in custody.

He found that no such record existed, so he worked with the University of Limerick to examine the merits of one in the hope it could help policy-makers learn lessons and reduce the number of prisoner fatalities.

The findings of the two-year project were revealed in October, but plans for how the system will be populated are still to be finalised.

Click here to see a database created by The Detail which gathers information drawn from the inspector’s published reports into prison deaths. Individual prisoners are anonymised in the inspector's reports and are therefore not identified in our database.

In a rare interview with The Detail four days before his recent death, Judge Reilly said: “Prisoners only forfeit their right to freedom, they don’t forfeit all of the rest of the rights members of society have - these rights are human rights which have been guaranteed by the international community.

“One of these human rights is a right to dignity and that applies to prisoners and, when a country imprisons people, they must ensure the dignity of those prisoners.”

A spokesperson for the Irish Prison Service told The Detail “robust procedures” were being developed with partner organisations around investigating deaths in custody.

He added: “The Irish Prison Service has also introduced a standard approach to the internal investigation of a death in prison custody.

“All prison governors are obliged to complete an internal investigation and to return an 'Internal Review Report' to the Director General within two months of the death.”

Read an overview of prisoner deaths across the island of Ireland here.