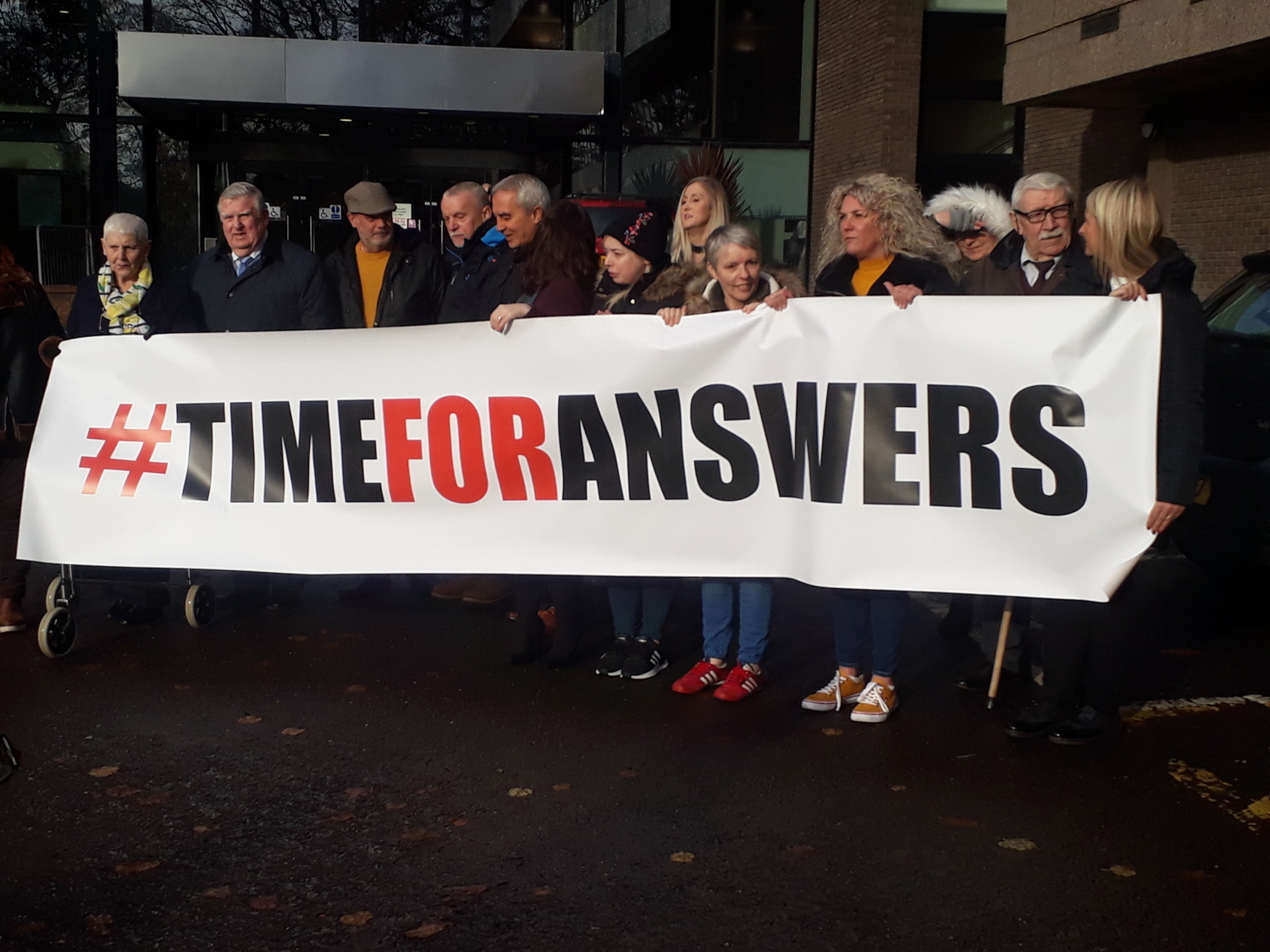 CONCERNS have been raised that Covid-19 is being used to halt a review looking at the medical records of the deceased former patients of Dr Michael Watt.

In May 2018, the Department of Health (DoH) commissioned the Regulation and Quality Improvement Authority (RQIA) to carry out a review of the medical records of all of the suspended Belfast Trust (BHSCT) neurologist’s deceased former patients who died in the previous 10 years.

However, the DoH instructed the RQIA to cease this review two months ago, on March 20, 2020.

Correspondence, seen by The Detail, sent by Dermot Parsons on May 4, when he was the interim Chief Executive of the RQIA, to Alex Easton, a DUP MLA and Stormont Health Committee member, states that while the RQIA plans to recommence this review, “the precise timing of this will be determined by a further direction from the Chief Medical Officer (Dr Michael McBride)”.

Colin Armstrong’s mother, Ruth, became a patient of Dr Watt's in February 2001. She remained on his books until her death in November 2002, aged 78.

While his mother’s death occurred outside of the 10-year period that the RQIA review was initially supposed to be looking into, Mr Armstrong was informed that if people such as him – the relatives of former deceased patients of Dr Watt who died outside of this timeframe – so wished, their loved one's medical records would also be examined.

However, even prior to the Covid-19 pandemic, Mr Armstrong was worried about how the review was progressing.

He believes the current public health situation is being viewed “as an opportunity to bury bad news”.

Mr Armstrong told The Detail: “I’m concerned that the official suspension of the RQIA review in March simply means it has moved from a shallow grave to a deeper one.”

A DoH spokesperson told The Detail their department directed the RQIA to “focus its activities on responding to the impact of the global pandemic and areas of greatest risk across our health and social care services”, which involved the “temporary cessation” of the RQIA’s review programme.

They added: “The department is currently reviewing the direction issued to RQIA.”

It has been confirmed that the entire nine-member board of the RQIA has resigned over decisions made, regarding care homes, during the Covid-19 pandemic.

Previously, The Detail revealed that the DoH instructed the RQIA to cease its routine inspections of care homes during this public health crisis. However, as news broke yesterday (June 22) of the mass resignation by the RQIA board, the DoH lifted the restriction.

Mr Armstrong told us: "This mass resignation confirms what I've long suspected – that the RQIA is a dysfunctional body. It needs reformed, with its independence from the DoH reasserted and given firm legal protections.”

Of the 2,952 patients assessed as part of the BHSCT’s neurology patient recall, which was conducted due to concerns about Dr Watt’s work, 20.9% had a diagnosis that was considered insecure while, for 11.1% of patients, there was uncertainty in respect of whether a previous diagnosis was secure.

The recall report was published in December 2019 after being postponed. Its findings were initially due to be released in June 2019.

In April 2018, a final version of a report by the Royal College of Physicians (RCP), which raised concerns about Dr Watt's work, was sent to the BHSCT.

This RCP report has never been made public.

In May 2018, after the RCP report was sent to the BHSCT and before the restoration of devolution, Richard Pengelly, the Permanent Secretary of the DoH, established the Independent Neurology Inquiry, chaired by Brett Lockhart QC.

In the same month that the inquiry was set up, the RQIA review into Dr Watt’s deceased former patients’ medical records was also commissioned.

In January 2020, The Detail reported that despite 20 months having passed since this review was commissioned by the DoH, the RQIA could not confirm the number of cases it was examining as part of it.

An RQIA spokesperson has now confirmed to The Detail that their organisation has, so far, examined no records of the suspended neurologist’s deceased former patients.

Mr Armstrong said: “There needs to be a lot more brought to bear by our politicians in relation to this review.”

In May 2018, Mr Armstrong received a letter from the then Chief Executive of the RQIA, Olive Macleod, in which she advised that the RQIA was “finalising arrangements” for the deceased patients’ review.

At the outset of the Covid-19 crisis, Olive Macleod was appointed interim Chief Executive of the Public Health Agency.

Mr Armstrong believes the letter shows that the RQIA had been shaping up to begin reviewing records in the months following May 2018.

He said: “They cannot deny the authenticity of this letter and their only response to my questions about it to date is silence.”

The RQIA spokesperson told us: "I can advise that in May 2018, RQIA was finalising arrangements to identify RQIA staff to manage and plan arrangements for this review."

Mr Armstrong added that he had “regularly” contacted the RQIA about the review, but that all of his correspondence from August 2019 onwards had been ignored, until he received correspondence on May 19, 2020 from Emer Hopkins, the organisation’s acting Director of Improvement.

Ms Hopkins’ letter states that the RQIA “always anticipated that this large and complex review may take several years to undertake”.

The RQIA spokesperson then subsequently told us that any such review would take “considerable time to prepare and plan”.

However, Mr Armstrong responded: “They didn’t say that when the review was announced two years ago.”

The RQIA spokesperson also said: "To ensure all parties involved have a clear understanding of their legal responsibilities, it was vital that we developed a legal framework in partnership with relevant stakeholders under which this review is to be carried out.

"This has been a highly complex matter and this framework was finalised in February, just prior to the DoH’s direction for RQIA to pause its programme of reviews.”

The Detail was also told by the RQIA spokesperson that, without this framework, "the process of establishing and confirming the dataset of records could not be undertaken, nor could we confirm the number of individuals whose information would be processed".

Ms Hopkins letter to Mr Armstrong also adds that the RQIA has now “completed the development of a legal framework” to allow her organisation to access the medical records of Dr Watt’s deceased former patients.

However, the letter acknowledges that the RQIA received medical records belonging to Ruth Armstrong from the Business Services Organisation (BSO) in 2018, which her son said makes Ms Hopkins’ recent claims “confusing”.

“They got my mother’s records without this legal framework,” he said.

Ms Hopkins’ letter also states that Mr Armstrong’s mother’s records “were returned to the BSO as we (the RQIA) did not require them at this point”.

Mr Armstrong responded: “Why were they acquired in the first place if they didn’t require them? It doesn’t make sense."

Ms Hopkins’ letter adds that once a time for the recommencement of the review is agreed with the DoH, “further preparatory work” needs to be undertaken before the RQIA can request any deceased patient’s medical records.

The RQIA spokesperson then also told us that “several other planning phases” need to be completed, when the programme recommences, before the records can be reviewed.

Correspondence sent to one of Dr Watt's former patients, by the PSNI’s Detective Superintendent Jason Murphy, in January 2020, says the RQIA review will be important in "considering to what, if any, extent did the practices of Dr Watt impact on the deaths of some of his patients".

Detective Superintendent Murphy has subsequently told The Detail: “We must await the publication of a number of reports before being able to take an informed view and assess the most appropriate way to proceed.

“We will continue to work constructively with the DoH to enable us to consider all of the relevant material in due course."

However, Mr Armstrong said: “The police should be able to work independently of agencies such as the RQIA. They should also be able to require such agencies to provide information that they already possess.”

On June 13, 2020, the Belfast Telegraph reported that Health Minister Robin Swann said Covid-19 caused the DoH to delay its planned release of findings from the second phase of the BHSCT neurology recall. The DoH had initially proposed to provide this information before the end of June.

Minister Swann also said he was due to announce another recall stage, but that Covid-19 has delayed this too.

David Galloway is the director of the Multiple Sclerosis Society in Northern Ireland.

He sought clarification from the RQIA late in 2019 on how its review into the records of Dr Watt’s deceased former patients would be formatted, but he “did not get an answer on this issue".

Mr Galloway was, however, then offered a meeting with the RQIA which was due to take place in March 2020, but the ongoing public health crisis meant this meeting had to be put on hold.

He told The Detail: “If there were to be any change to the work commissioned by the DoH, for the RQIA, I would expect the Health Minister to publicly announce that.”